Our Lady of Ballinrobe: 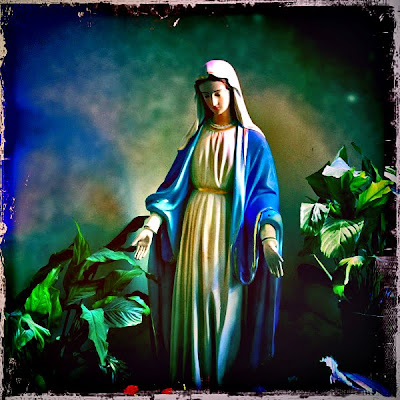 I wonder, when it rains hard here and all the low bogland
and shallow fields fill with water, if suddenly on ordnance
maps there appears additional evidence of lakes and ponds?
Over-spilling, and everywhere the constantly changing sky
reflected on the surface of the earth.

Generally when I'm here in Ireland, it feels as if the same
thing happens in the visual-storage centers of my brain:
filled overfilled spilling out save save save. No infinite memory
can possibly contain all I desire to contain, to store.
I take photos, tweak photos, makes collages in as many shades
of green and blue possible, press soft oil pastels to paper,
write and write and write. I go to the markets and buy enough
produce to feed a hoard, come back to the house and chop
and dice and mince and saute and bake and roast and drink
red Bordeaux all the time the music cranked to speaker-cracking
volumes. I could spend all of this next (and last) week
just picking blackberries, half for me, half for the horses,
and feel like my time had been as well-spent as is possible.
The big question, then, for me, is how to choose
what to do? This is a luxury beyond what I could ever
have imagined in the years of raising children and working
often three jobs at a time just to pay rent and plunk down
on the dinner table a tuna casserole (which now precipitates
the gag reflex).

I adopted a stray cat 13 years ago who walked in the door
with guests at my 40th birthday party. Homely black-and-white
unneutered male, with a tiny-head and ridiculously long body:
a yowling bone-bag who topped the scale at just five pounds.
We couldn't seem to feed him enough -- he'd drag a loaf of bread
from the kitchen counter, rip open the bag, and franticly
consume as much as possible as quickly as possible.
I decided to feed him as much cat food and dinner scraps
as he could take in for about a week, and he finally settled down.
His screaming yowl, though, continued for years until we taught
him to meow without making a sound. We really did this!
And now he's long and plump with a belly that sags
like a suspension bridge between the supports of his legs.
And irrepressibly cheerful! (I used to tell my boys,
it you ever wonder how to react to a situation, just Be Like Tip.)

But the notion of satiation, saturation, satisfaction -- when is it
that one has had enough? Is it greed? If so, then greed
is perfectly acceptable.

We went on a pilgrimage yesterday afternoon to seek out
the work of Harry Clark, an early 20th century master
of stained glass art. I was struck silent in gape-mouthed awe
at what I saw. In a country devoid of grand cathedrals
and castles, where hundreds of years of oppression
leaves it remnants of ruined abbeys amidst cow pastures
and grazing sheep, these windows are akin to having
the Sistine Chapel in one's backyard. Paul and I traipsed
through nondescript churches (with a modicum of reverence
stemming from our faintly lingering Catholicism), climbed
on pews (this felt completely sacrilegious), peered down
from choir lofts and poked around behind altars.
(I did not, however, genuflect even once.
Nor did I dip my fingers in the holy water font,
which I almost regret seeing that that particular act
has always seemed wonderfully pagan to me.)
In Cong -- where the movie The Quiet Man was filmed --
the windows were low enough and accessible so that
I could run my fingers across their surface, and although
the gown of a saint appeared to have the luster
of emerald silk velvet, it was indeed glass. 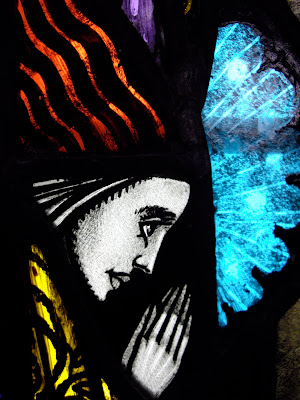 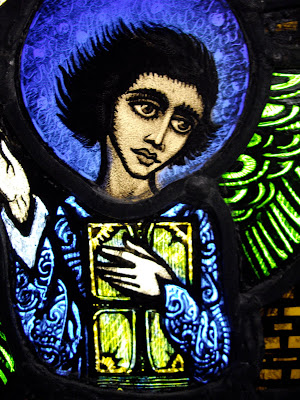 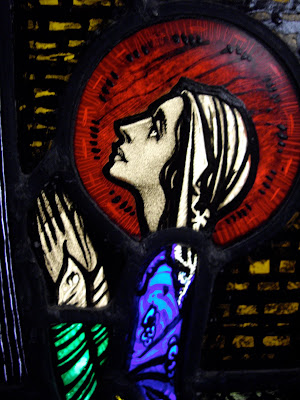 I had no language for hours after that,
and as we drove back to the coast through the mountains
and valleys of Joyce's Country, we were assaulted again
and again by a spectacular and numbing beauty -- 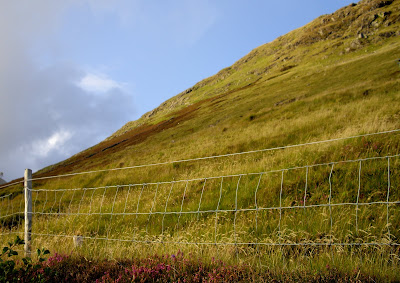 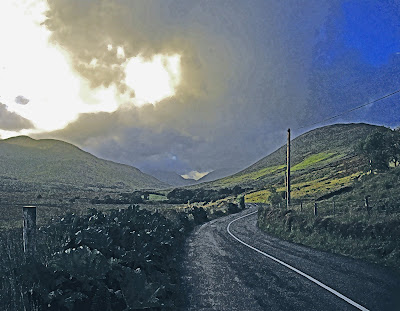 I was, however, able to say to Paul Turn Around! and Stop The Car!
Poor man. Kind and generous man: he kept stopping for me,
all with continual good cheer. At one point I pressed myself
into the heathers side of the road so an oncoming car careening by
at 100KPH wouldn't hit me and still the force of his/her speed
sucked the breath from me and my pulse leapt exponentially
but I didn't stop taking photos, no sirree bob!

I still haven't processed everything I saw yesterday.
There's a yawning upload going on upstairs
and nary a rush for anything.
Posted by T. at 1:15 AM