It seemed long past quitting time, but I was finishing a piece of glass, buffing out the residue left by the oils post-firing, when I noticed that the colors on the glass were the same colors as the sunset: payne's grey, yellow ochre, turquoise blue.

Or, rather:
art is life.
Life is art.

My son recently turned me on to Joseph Campbell, the American mythologist, writer and lecturer, so one day this week, when we were sitting around the big table painting, we listened to some of "The Power of Myth", with Bill Moyers. (Highly recommended.) It's deeply affirming, powerfully moving stuff —and I'm still in the early stages of digesting it, so I won't venture to comment much yet. But in the midst of the second episode, we were interrupted by two men picking up a large shipment of work for the Bainbridge Island Museum of Art gift shop, and one of them began a story of their most recent house-sitting adventure, which I'll write here in my own words:

"There were goats and chickens on the property that we had to take care of, and the owners said that we needn't do much with the chickens, just throw them some food every day, because they were old chickens and long past laying.

Well, chickens were new to me, so I decided to see just what they were about. I swept up their sawdust every day and sprinkled new sawdust. I brought fresh water and food, and just hung out with them at least once a day.

And I began to cluck, you know, those little buck buck buck sounds. And they began to talk back to me. It was really sweet! They were kind of a kick. I really liked them.

And guess what — they began to lay again. Eggs! We had fresh eggs from those old hens who supposedly were done with their laying days."

Well, of course I couldn't help but tie this in to what we'd been listening to — the serendipity of this man walking into our afternoon with his unassuming story of the traveler who appears one day and changes the shape of things, who performs miracles, a kind of refigured loaves-and-fishes tale. Our very own living myth-maker, our teller of parables.

These were the gifts of the week — Joseph Campbell, and then the interlude of the chicken story.

Outside of this, the week was swirled in a kind of chaos — our show materials shipment arrived back home from the east coast, three pallets full,  and as it was unpacked, I had to examine and polish each piece and then repack in new configurations, to go to the photographer. (Hundreds of pieces.) Shipping materials everywhere, and we work in a small space. And glass being sand-blasted, painted, fired. Orders going off to all corners.

We're also sifting through legal issues and fallout concerning last summer's glass-smashing, as well as recent events (of which I won't write here). Issues of security and law-breaking, of locks and keys, and violation. We've been on the cliff-edge of alarm.

I'd much rather spend my days contemplating things like this:


"Eternity isn’t some later time. Eternity isn’t even a long time. Eternity has nothing to do with time. Eternity is that dimension of here and now that all thinking in temporal terms cuts off. And if you don’t get it here, you won’t get it anywhere. The problem with heaven is that you will be having such a good time there, you won’t even think of eternity. You’ll just have this unending delight in the beatific vision of God. But the experience of eternity right here and now, in all things, whether thought of as good or as evil, is the function of life."    —Joseph Campbell

I went to the altar of poetry, lit up with love.

Last night, as I drove to my weekly open-mic (as close to a notion of "church" as I'll get), my headlights lit the road brightly before me, and yet there was a less discernible glow coming from mysef as well.

I'd asked one of my sons if he'd replace a burned-out headlight bulb, and he not only did it, but taught my other son ( who is not quite the handy-man type) how to do it as well. And that made me beam, a bit, the notion of my path being lit by a collaboration of my sons.

And yes, the poet in me wants to haul out all the metaphors for a mother lighting the way for her children, but I'll refrain. Yes, as mothers we do that, instinctually. Not necessarily as instinctual for one's offspring to pay back the favor. Hoped for, yes, but not expected.

It was a small thing, but made all the more meaningful upon my return, close to midnight, driving the mostly-unlit lake route back to my house.

The James Fenimore Cooper volume, abandoned to the elements — 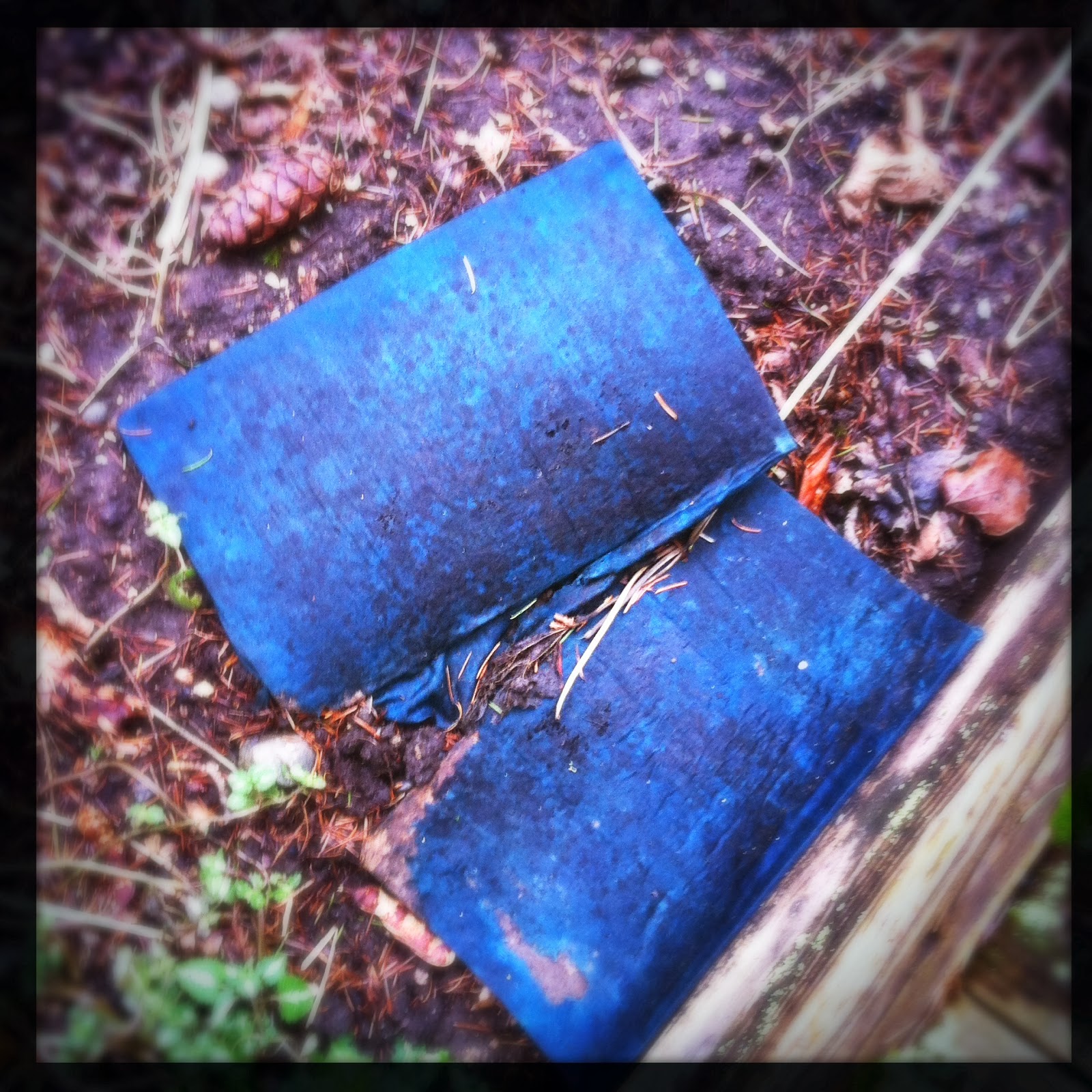 Made blurry not only by the trick of a filter, but by the persistent rain loosening the ink on the decades-old pages — 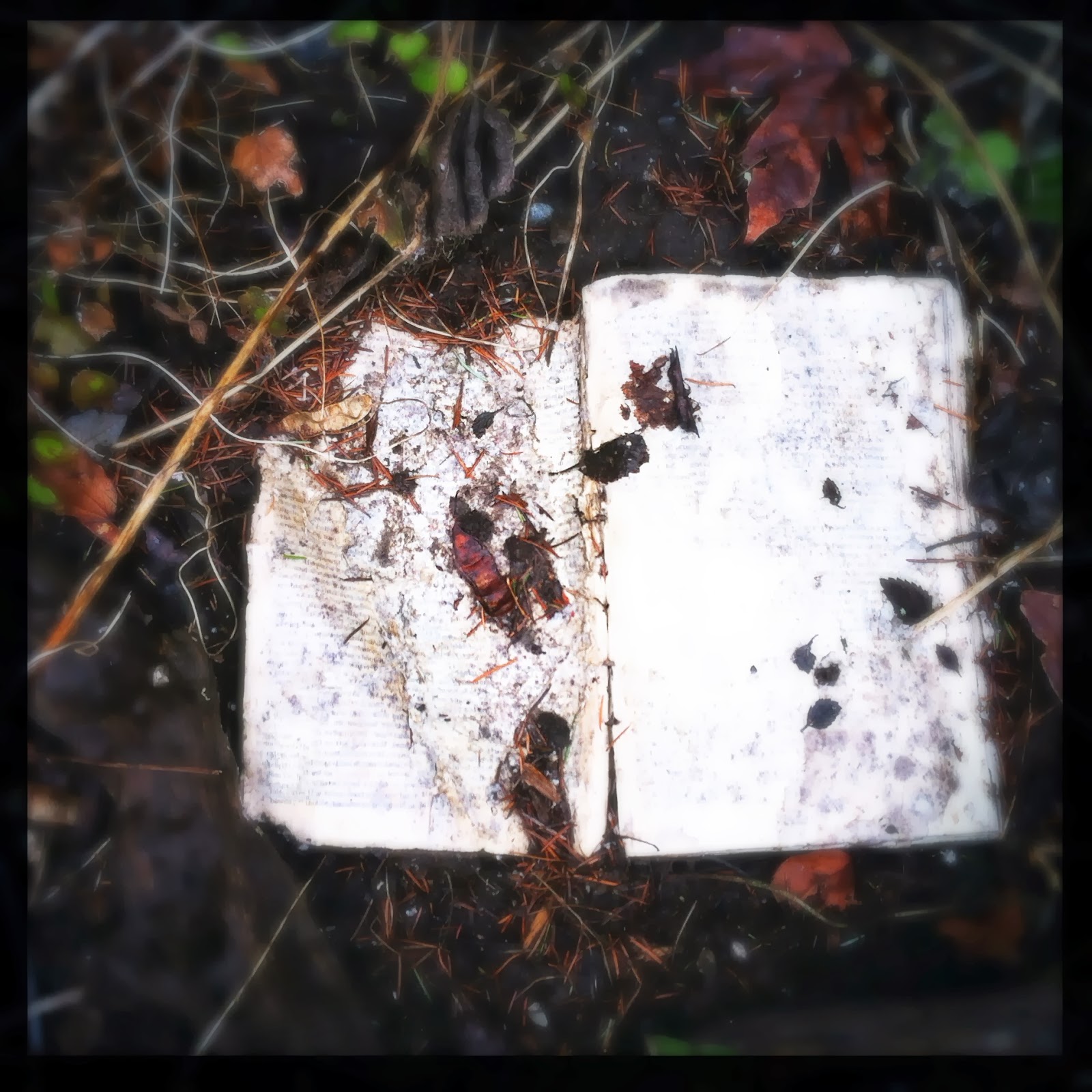 And a red wagon — 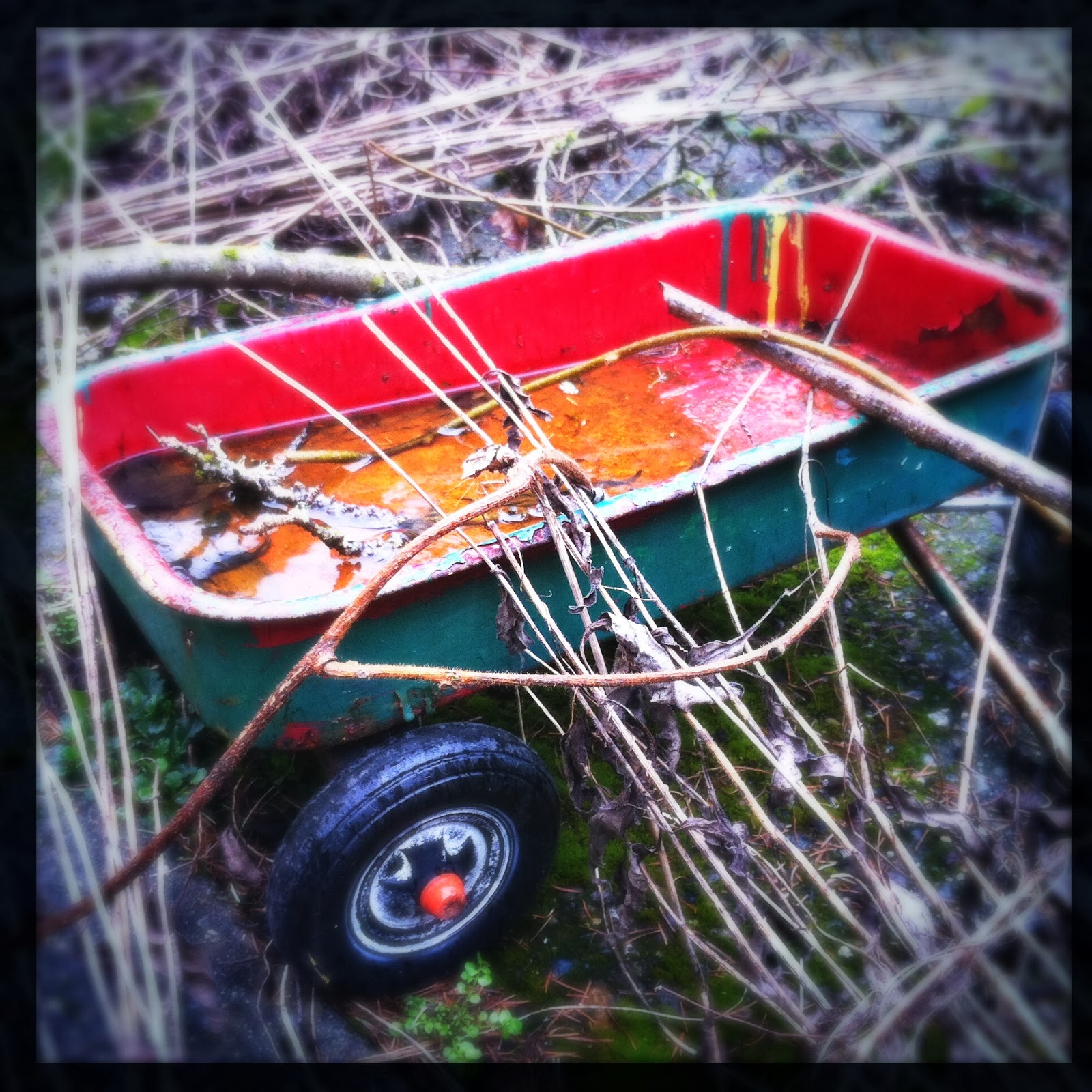 I walked around the winter garden this afternoon just as a new storm was moving in, taking stock. I repaired the fence with bits of wire and hung up a bird feeder blown down in a voluminous wind. Snowdrops were up, pushed through the autumn leafage.

Afterwards, I came in to see this short film, making the rounds on facebook. If you've yet to see it, it's worth the four minutes of your time. How massive is our footprint in comparison to a population of deer in Yellowstone, and how profound the impact has been on the entire ecology in that patch of earth just by a shift in the numbers of a single species.
Posted by T. at 3:01 PM 4 comments: 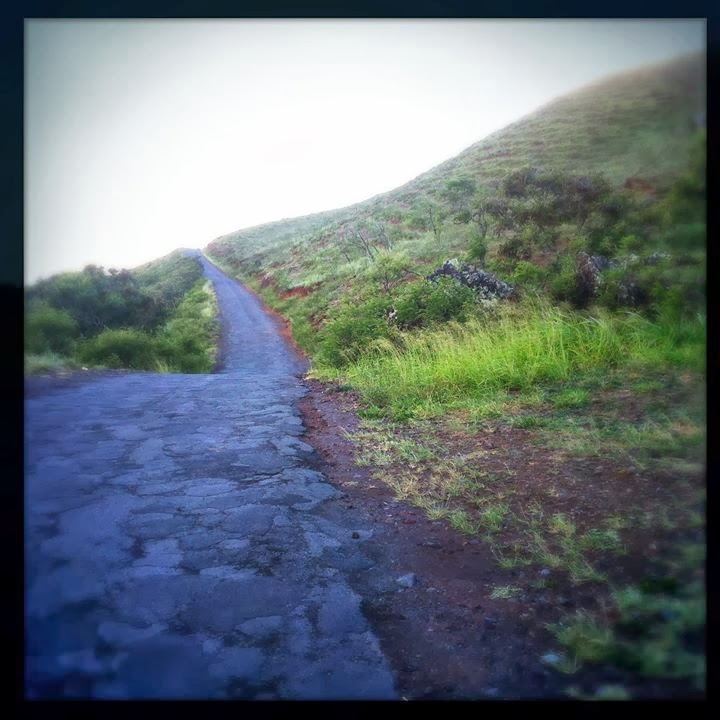 This package arrived on the back porch at work yesterday, addressed to the boss, who was on her way home from NYC — 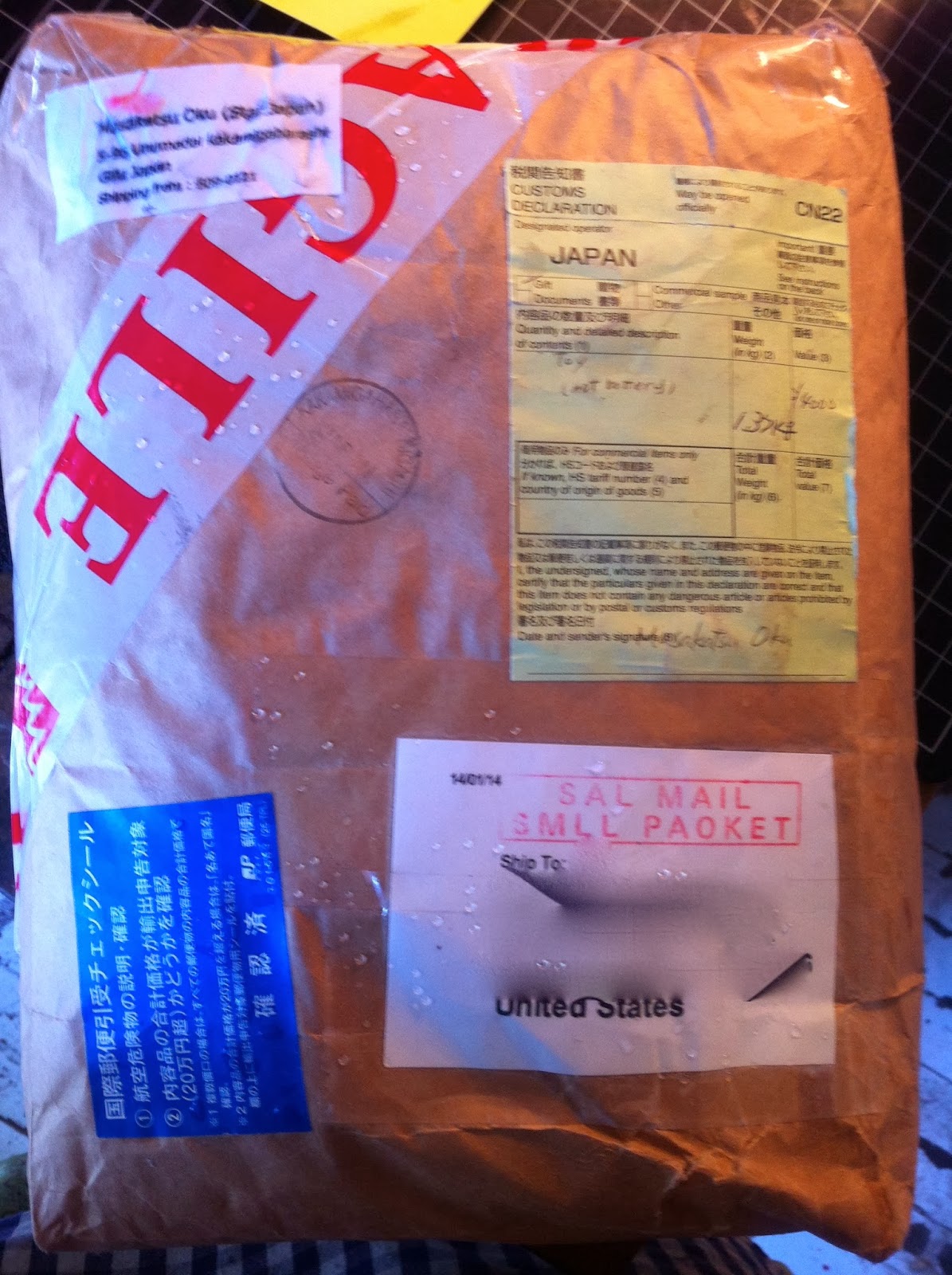 We were intrigued by the customs declaration that it was a toy, and that the value was $4000. What the heck? Just what has she been up to? 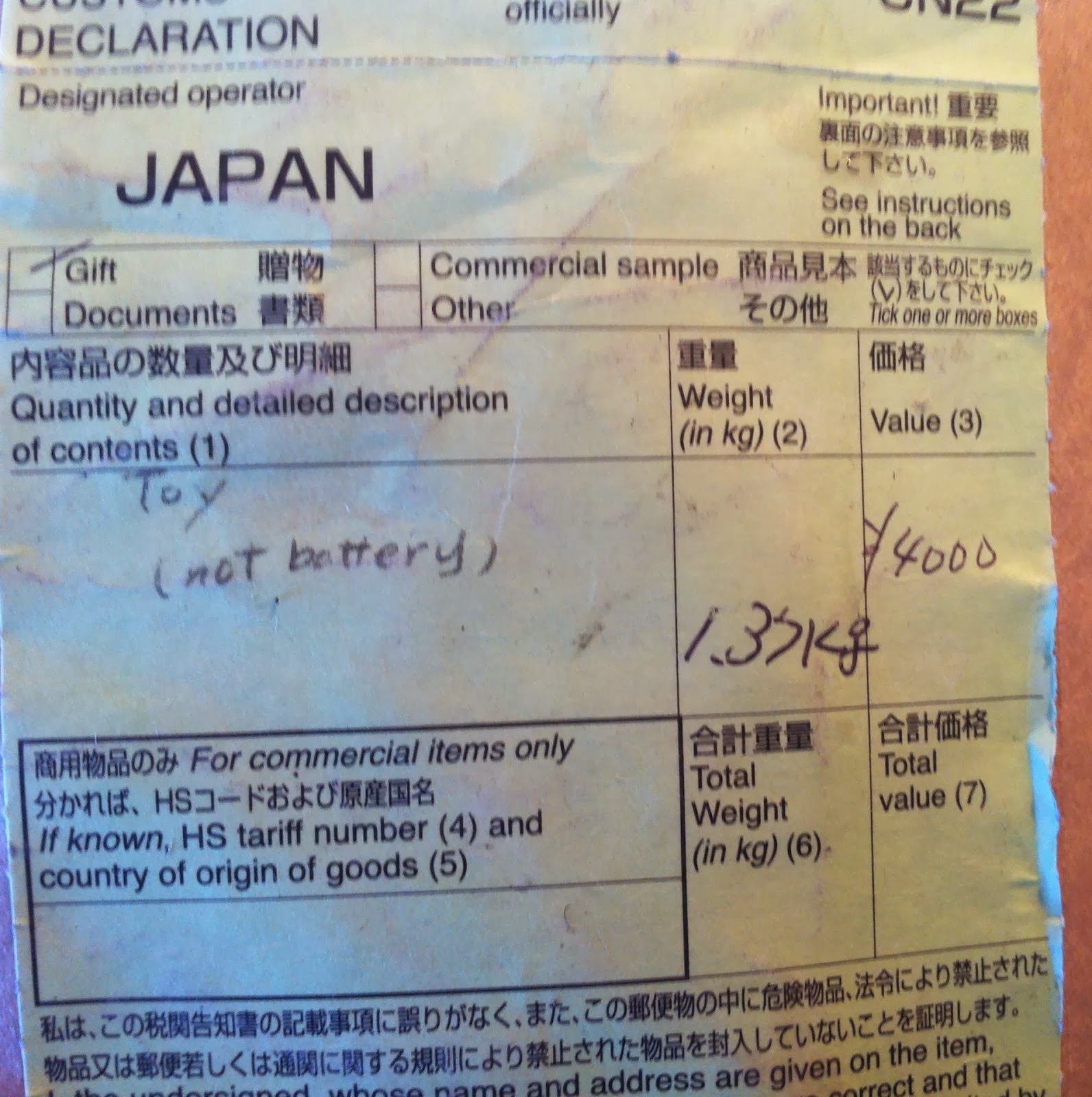 I texted her the first two photos shown here, and got my answer: 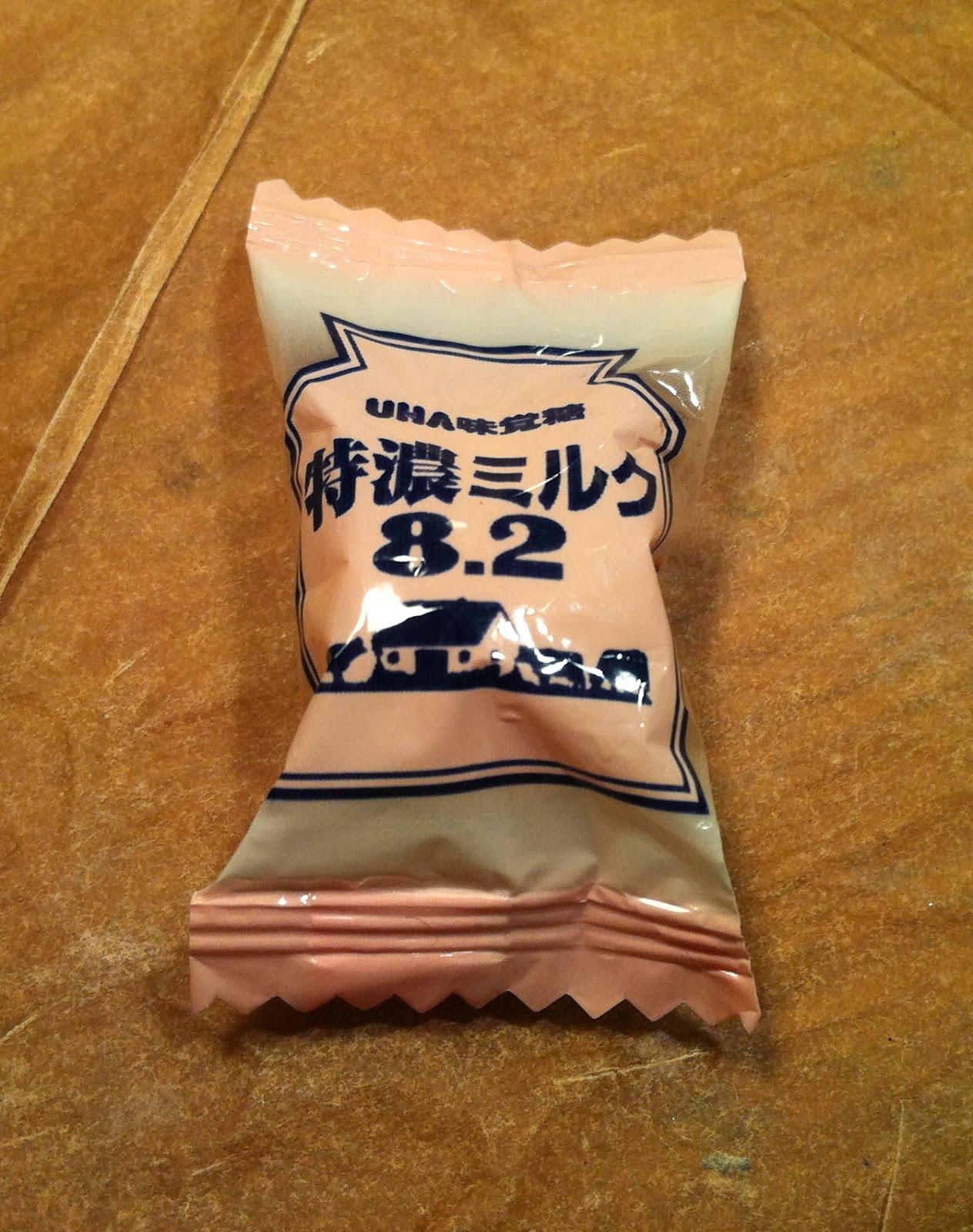 Neither toy, not $4000, but our favorite candy, the milky caramelly "8.2", shipped via Amazon Prime, from Japan. I'm guessing that it was a drone delivery, from across the great wide Pacific.
Posted by T. at 6:24 PM 4 comments:

There's light now at 5pm, and I know it happens every year and every year it seems like a bit of a miracle or a large part of a miracle or even an entire miracle unto itself. The return of the light, and 5pm is one of those pivotal times, a shift from day into evening, a letting-go of the workday and letting oneself into the last interval of aliveness in a single day.

Every year I wait for it and every year it surprises me, like there's a small part of me that doesn't believe it's going to happen, that maybe we'll be forever plunged into short days and interminable nights.

O lordy this is getting to sound grim.
Best to end here.