Days of frantic sewing —
of dotted Swiss and seersucker and sometimes
pink wool, for a coat cinched with a chain.
Of dresses passed down, pared to size;
of rick-rack and hand-sewn hems. Of buttons
plucked from the button-tin, lucky if matched.

All was new or new to me:
gloves soft as a rabbit's ear, a pearl at each wrist.
Shoes to grow-into, and a hat that snapped
an elastic welt under the chin.
I tripped off to mass with my five sisters,
fussy in last-minutes stitches.

Impatient with The Strife is O'er — the dirge of it!
Wanting only to shed this membrane of prettiness,
escape to the topmost branches of a maple
where I could bellow my hymns —
my solo Alleluia's —
swaying on thin limbs.
Posted by T. at 10:41 AM 9 comments:

He told me once that he would drink less
if I baked every day. Seemed an easy solution!
So it was oatmeal cookies and apple pie
and cake and zucchini bread and baguettes
and puffed-up honey whole wheat loaves
and tapioca pudding and lemon-blueberry muffins
and buttermilk biscuits I could make with my eyes closed.
Sometimes I baked twice a day, at breakfast and dinner:
waffles and cornmeal pancakes and poppy seed breadsticks
and chocolate cream pie and 2-egg yellow cake,
or Black Midnight Cake from my mom's Betty Crocker
3-ring cookbook (the page stained and ripped) .
Or chicken pot pie or stuffed crepes or popovers or shortcake.
Not enough, apparently, so I opened a bakery
and damn if he didn't die drunk a November night
after I'd spent the afternoon spooning fruitcake
into a row of tins - the one and only time I've made fruitcake.
Never knew how/if it turned out, or if anyone bought it.
(If it suffered its way into the garbage.)
Posted by T. at 7:15 PM 5 comments: 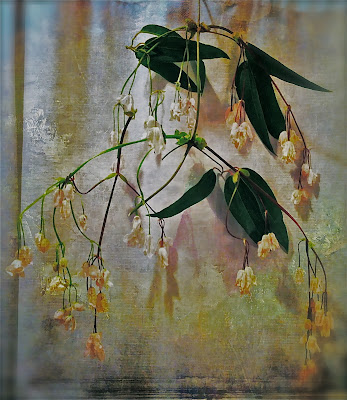 Yesterday, I carried home from work a long tendril of clematis armandii, and today, though they've wilted, the room is afloat in their scent — a kind of powdery gardenia scent, with barely a suggestion of spice. It's glorious.
Posted by T. at 9:31 PM 4 comments:

Warning: May Cause Weeping

A friend forwarded this to me tonight, from the website Zen Garage:

Marina Abramovic and Ulay started an intense love story in the 70s, performing art out of the van they lived in. When they felt the relationship had run its course, they decided to walk the Great Wall of China, each from one end, meeting for one last big hug in the middle and never seeing each other again.

At her 2010 MoMa retrospective Marina performed ‘The Artist Is Present’ as part of the show, where she shared a minute of silence with each stranger who sat in front of her. Ulay arrived without her knowing and this is what happened. (Written by Justin Fox)
Posted by T. at 11:20 PM 6 comments:

Wintered-over in a corner of the bathroom
since October, watered only once
these five months, and so little heat
even the tiles shiver, on the first day
of spring my geranium bursts forth
twin blossoms in a pulse of scarlet— 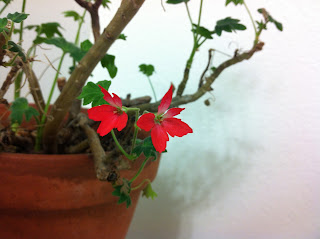 In response to yesterday's neighborhood shooting and the subject of the previous blog post, here are two vastly differing accounts of the events that led to a suspect's death (apologies for the weird formatting in the first part, due to blogger issues when I copy and past [and just gets worse if I try to correct]):

From The Seattle Times: