Although my father was an accomplished musician — he played both violin and piano — the only tune I can associate with my memory of him is Ave Maria, sung by a man named Andy Sedlack at his funeral in 1966.

And back then, with no longer anyone to play it, my mother doomed his violin to the far-back of the basement, in the company of the wheezy furnace, and a lump of rosin entombed within green velvet in a black violin case.

The piano she sold to the neighbors, and we rolled it from yard to yard on planks laid end to end.

I must wonder at her grief, and her clearing-out of those sources of so much joy. (When I think of my father at the piano, I recall his hands moving quickly over the entire keyboard, containing, in my child's imagination, all 88 keys with seemingly zero effort.)

He died in early January, and those winter evenings stretched out interminably silent. We did our homework at the kitchen table, or read in quiet companionship in the living room. There was so much that was absent of light, as if half the lamps had been unplugged, and they hadn't been.

And there must have been a hubbub of voices — how could a family of (now) eight possibly maintain much quiet? But indeed, all these years later, it's the silence that speaks loudly to me now, roaring through the decades to this late February night.

When I'm walking home and it's close to sunset, and people have begun to turn their lights on inside their houses, there is that passing flash of a moment when I can see into someone's life: the color of paint in a living room, art on the walls, sometimes a glimpse of pans or a shelf of spices in a kitchen. When the weather warms, there are cooking smells also, curling out their wisps to the early evening air. Screen doors shutting. Someone playing drums. A symphony in full blare from speakers. Fragments of conversations from open windows.

We're beginning that slow transition to a more public neighborhood, that seasonal shift as the air warms. Now, after work, there's someone walking a dog every half-block, and sometimes kids in the street with a ball, or bikes, or skateboards. All these lives that have survived buttoned-up these dark months slowly raising their curtains to the new angle of the sun.

And some days, the private inside is carted out onto the sidewalk. 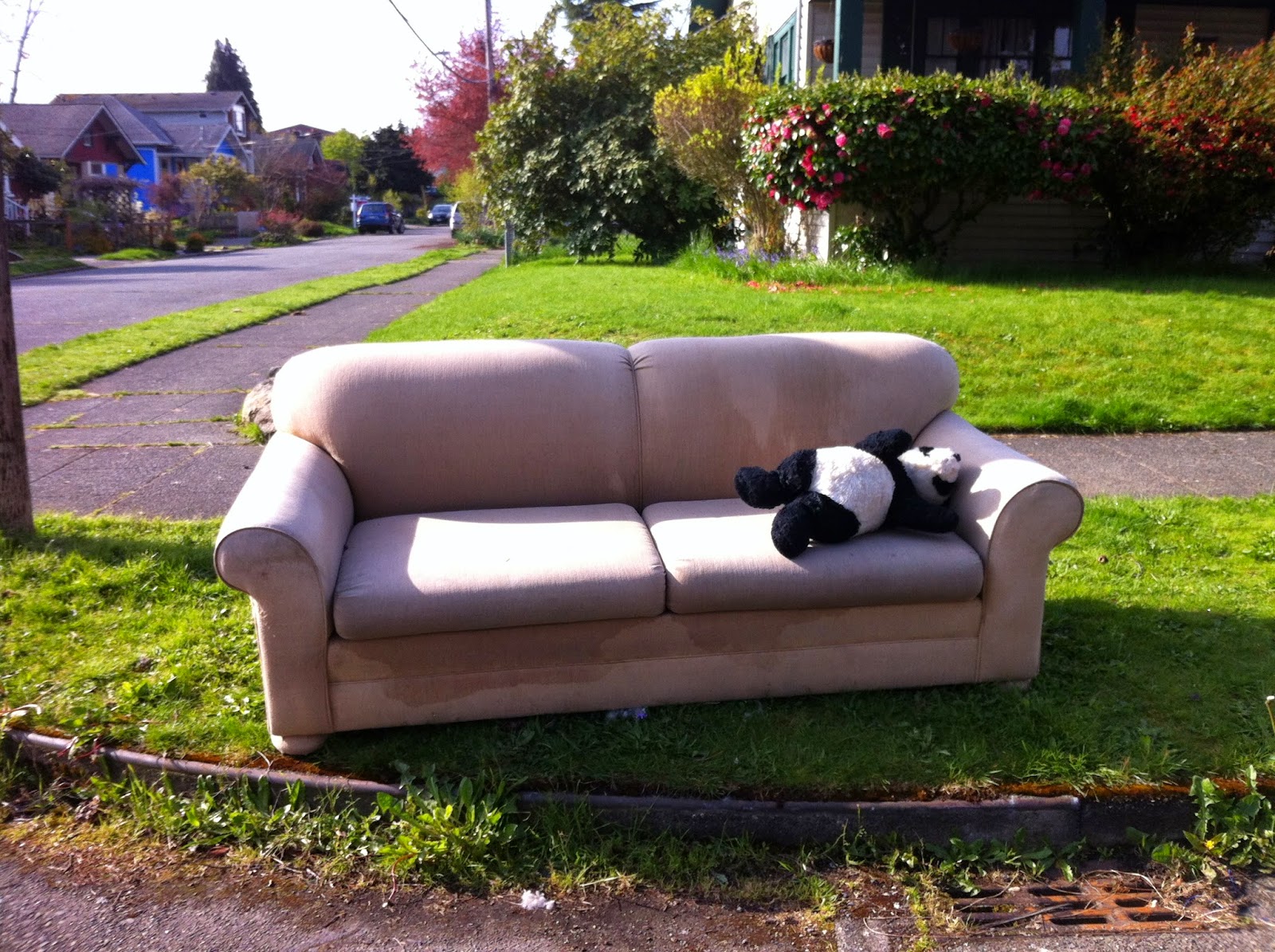 This afternoon my sister and I bundled up and walked down and down, from the bluff high above Alki Beach, down narrow tree-lined streets that seemed like secrets, houses perched on cliff-edges, switch-backing & winding down to the water's edge where the wind was fierce and biting, the sky inordinately blue, and people were larking about in shorts and tank tops. What the hell?! I was so cold, despite my sweater/coat/scarf/beret, that I put my hood on too and then held it tightly closed at the neck.

There were windsurfers out in the bay, rising up into the air and then cutting back into the waves. Amazing that they didn't get tangled up in each others' lines! A large group huddled around a fire, and they were putting food out, but I can't imagine how they kept it all from going airborne.

Cargo ships, perhaps six of them, sat idle on the Salish Sea, immobile due to a labor dispute. An eagle flew just above us, really just above our heads, maybe thirty feet, and I turned to watch it as its white head flashed in the sun, and it glided on thermals for what seemed like forever, not a flap of wing, until it disappeared far in the distance.

And then it was back up the hill, steep and steeper, the wind easing considerably away from the shore. And we unbuttoned and unscarved, huffing and puffing, warming as we climbed, up and up to the tidy hilltop, land of wide green parking strips and blooming pink ornamental cherry trees and views of mountains on two sides.

It's difficult to remember that it's still winter.

These won't go live on the website until, most likely, next week, but I just couldn't resist posting these to my world of readers. (All, what — six? Seven of you?!)

I shipped the first collections of these out this week, and we're once again in full production mode. (Got my whip out.)

Can't decided which I like best; it seems to change on a whim, a mood, an angle of light. I am enamored of the new textures (love to run my fingertips over them!), and the minute-by-minute fluctuations of coloring as the light changes in the workroom: sun to cloud, glare to somber.

Bubbles, Seascape, Surf and Tideline are all developed from images Melinda took last fall at Cannon Beach, Oregon. Hours and hours spent poring over hundreds of photos, cropping and highlighting, color to black-and-white, contrast tinkering, printing and reprinting, sandblasting, experiments +++, yadda yadda yadda. And then, and then, and then. A massive undertaking; damn close to genius, actually.

They take my breath away!

All photography by Alec Miller.
Posted by T. at 9:50 PM 6 comments:

In The Elf Factory

The seven-foot-tall man came in from his job (catering at a large corporate hotel), and after a few minutes of our usual banter (we were all sitting at the big table, deep into painting), he said that coming from the corporate environment into our groovy painting scene was like walking into a Keebler elf factory.
Elves aside, we're starting production on the new lines, and it's thrilling. I've been working here for eight years, and, honestly, I think this is Melinda Wellsandt's best work to date. Doing a photo-shoot tomorrow of the new pieces, so I'll post some pics here when they're ready.
Posted by T. at 9:10 PM 4 comments:

Here's an irony: I am teaching the artist Gabriel Marquez —whose work is pictured below — how to paint on glass. He's been with us in the studio for a little over two months now, and this tremendously talented young man, a very quiet study, has been slowly and methodically learning the idiosyncratic techniques that we employ to keep this thriving art business rolling.

Every time he shows me a photo of some new work, I feel humbled beyond belief. This is a man entirely lacking in the hubris/ego department. In fact, a small dose of ego would probably do him some good, but whatever. He is refreshingly modest.

On MLKing day, he brought his nine year old daughter to work with him, and she and the boss's boyfriend (who is seven feet tall) sat at the table for two hours and cut out snowflakes. Giant-man vis-à-vis little-girl: utterly charming.