The wreckage of my body after a week of going to work sick when I should have stayed home but went because there were deadlines that otherwise wouldn't have been met. The absolute folly of that.
Will the owners of galleries in Ephraim, Wisconsin and Ogunquit, Maine (and Portland and Freeport) think of this and thank me when their orders arrive just in time for Labor Day Sales?

But here this morning there are clouds stacked up against the horizon and it's predicted to rain throughout most of the next five days. There was a buzz in the community about this yesterday, a welcome anticipation from even those most dreading the inevitable damp winter looming only a few calendar pages in front of us. We've all heard the news: hottest year on record. Frost's "Fire and Ice" plays unceasing in my background soundtrack, while the eastern half of our Evergreen State (yes, that's the state nickname) continues to burn: currently 1,150 square miles aflame.

Here, this morning, the hazelnut tree is buzzing with chicadees and juncos. All my windows are still flung open. Rejoicing in rain.

Petals on a Stump 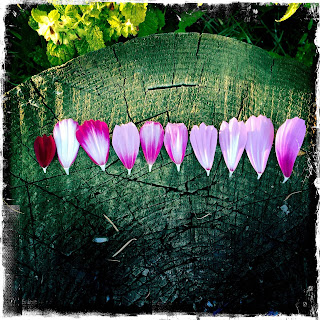 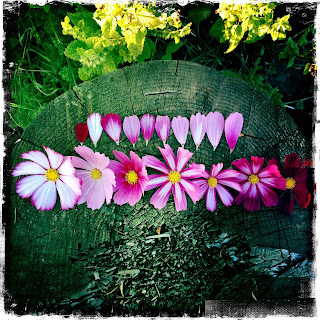 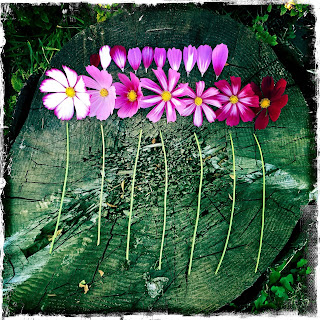 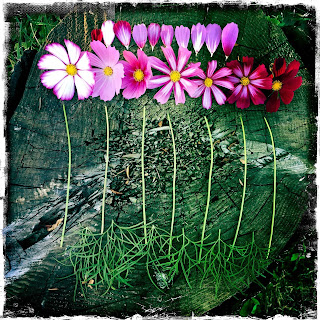 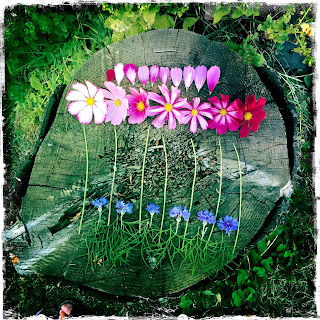 Peaches, Protestors and One Presidential Politician

I bought a 20 pound box of Elberta freestone peaches yesterday and made a peach pie so brimming with peaches that they actually broke loose out of the pie, as if the peaches were hatching. At the same time, my younger son was unloading the top half of the chicken coop he's been slowly building for me, a  chicken-wire and recycled-pallet affair with a cedar-shingled nesting box. He bought almost no new materials for it, which pleases me to no end. So, soon: chickens. Let the hen'n'egg puns commence. Pity my poor workmates!

But the pie: my older son took over prepping the fruit, and, wizard in the kitchen that he is, added vanilla extract and whiskey and brown sugar to the usual ingredients and my kitchen smelled like Heaven On High. Lawd, lawd. If I'd expired the moment I took a whiff I'd've expired blissfully.

On another note, I happened to be a member of the crowd last Saturday in downtown Seattle when presidential candidate Bernie Sanders was upstaged by a group of bullies who demanded the microphone. I can't imagine you've not heard the story, but if you haven't, here's a link to a Washington Post article about it.

I won't get into it; while I love reading opinion pieces, it's my least favorite kind of writing to do. But I will say that I'm glad I was there to witness what went down. This singular event seems to have propelled Senator Sanders into the mainstream media, from which he's been noticeably absent since he announced his bid for the office.

At the larger event that evening (15,000 people!), I was fortunate to witness, for the first time in my years, a politician who represents a loving kindness towards humanity. And while sometimes it seems too good to be true, I'm convinced that Bernie Sanders is the real deal.

As was the peach pie, with vanilla ice cream.