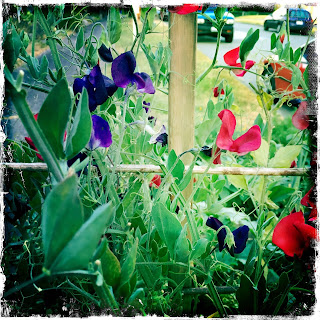 Memory as Fiction, as Truth

Going way back: my parents rented a beach cabin for a week at a place where, when I think of it now, I see a glittered sky, and sparkling light: Holly, on Hood Canal, in the eastern shadow of the Olympic Mountains. I like to believe I was two years old, but can we really remember all that far back? Whether I was two or six hardly matters. But I'll stick with that number, as it's what I've held all these years, and, well, it seems more primal, and, oddly, for some reason, more pure.  (And I know four people who would most likely correct me on this.)

Anyway. I slept in a double bed, in the middle of all my sisters. Five of us on one mattress, and me smack in the middle, where the covers kind of floated over me. The utter comfort in that, and the sense of security! I recall sinking down, not needing anything, and the glorious letting go into dream-land. And waking up laughing, being tickled. If that was the only memory I carried with me from childhood, I think it would be enough.

But there's more from that single occasion: in the cottage next door was a little girl who was a year older than me (three!), and she wore a sun bonnet, and tottered about her garden with a giant watering can. There were foxglove, and daisies, and tall blue spikes whose name I wouldn't know for many years: delphinium. I was enchanted by it all: bonnet, foxglove, watering can — in dappled morning light. And impressed by this "older" girl, and how she seemed so in possession of her world.

When I think back on this now, I ask myself, was this real, or was this a story read to me by an older sister? And if a story, how much of the actual story am I remembering, and how much is a fabrication built upon years and years of remembering and re-remembering? Or are these details — so commited to my consciousness as fact —merely details that I heard from the countless family stories told around the kitchen table on dark winter evenings? Whatever their inception, they have existed for half a century, hard-wired into the circuitry of my brain.

But let's not forget the oysters on the beach which could cut a nasty slice into my foot if I took off my salt-water sandals.  And the icy tide that lapped at sand and shell. There was probably a beach fire at dusk, and marshmallows on a stick, with graham crackers and chocolate at hand. And sticky fingers.

These were my thoughts tonight as I watered my vegetable garden, with my trusty old (and dented) watering can. And how that long-ago flower garden, whether it existed or not, has informed nearly every thought of flowers and gardens all the years since.

When I think of things I treasure — objects — this watering can is on the list. I don't know where it came from, or who had it before me, but it didn't come to me new, and it seems to have been around an awfully long time.

Perhaps I conjured it from memory? 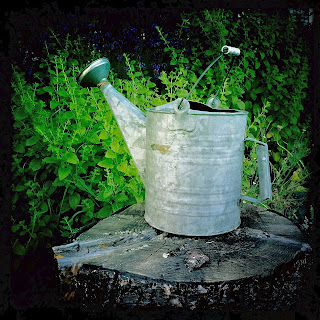 Walking the neighborhood tonight, I came across a man sitting on the parking strip in front of his house, a giant orange cat on his lap.

Puffy orange cat, man in orange and yellow geometric-print shorts and a green botanical-print shirt. White beard. The sun was setting and the sky yawned in tangerines and corals. So much color!

"Oh! That's never occurred to me!"

I continued on, up and down steep little hills, roses spilling out onto the sidewalk everywhere. I thought of a previous life, in the suburbs, when I felt as if I'd die of loneliness, loneliness for this urban neighborhood.

A man and his son throwing a baseball, the son in pajamas.

A couple on their front porch, their baby finally asleep.

The trickle of running water: a backyard fountain.

The tomato-and-oregano scent when I walk past the back door of the little neighborhood Italian restaurant, the clang of pans.

The breeze kicking up, a shift in the weather, clouds piling up against the mountains.

And then home again, to my humble house that is not a beach-cabin getaway, but home.

This is a good life:

A peanut butter sandwich and a dill pickle on a table covered with a red and white flowered cloth.

Sun and blue sky, a chair in the shade.

A baby crow in the honey locust and a baby hummingbird in the hazelnut.

A novel -- Benediction, by Kent Haruf -- so good that I don't want it to end.

There's been a steady stream of looky-loos at the house-for-sale next door; it's been all pimped up, photographed (what's with those l-o-n-g photos that make the interior look spacious when it's not?), and, well, we know, shaved. The marigolds and geraniums and rose bush that were plunked in the dirt in an effort to re-shrubify are wilting, terribly, in our unseasonably warm temps. Oh well.

A blue sixties convertible in need of a new muffler just pulled up and off-loaded the realtor and her "open house" sign. I anticipate a 3-hour parade of gawkers peering over my fence, sizing up the neighborhood.

When the "for sale" sign went up this week, I checked out the deets and was completely surprised to find this in the charm-extolling text:

Now, I've been on this street for going on 29 years, and how in god's name I've not noticed a beach is a complete conundrum. I know for certain that there's no beach in the back yard, so maybe I'm missing something in the view looking out to the street, as seen below —

cute, sweet, adorable and Kozy with a capital K!

Honestly though, I'd prefer a beach cabin getaway to one of those new million-dollar box houses that are popping up all over the city.