I don't cotton to religion.
For the record.
But an endless fascination with the iconography, well, yes.
Posted by T. at 9:41 PM 3 comments: 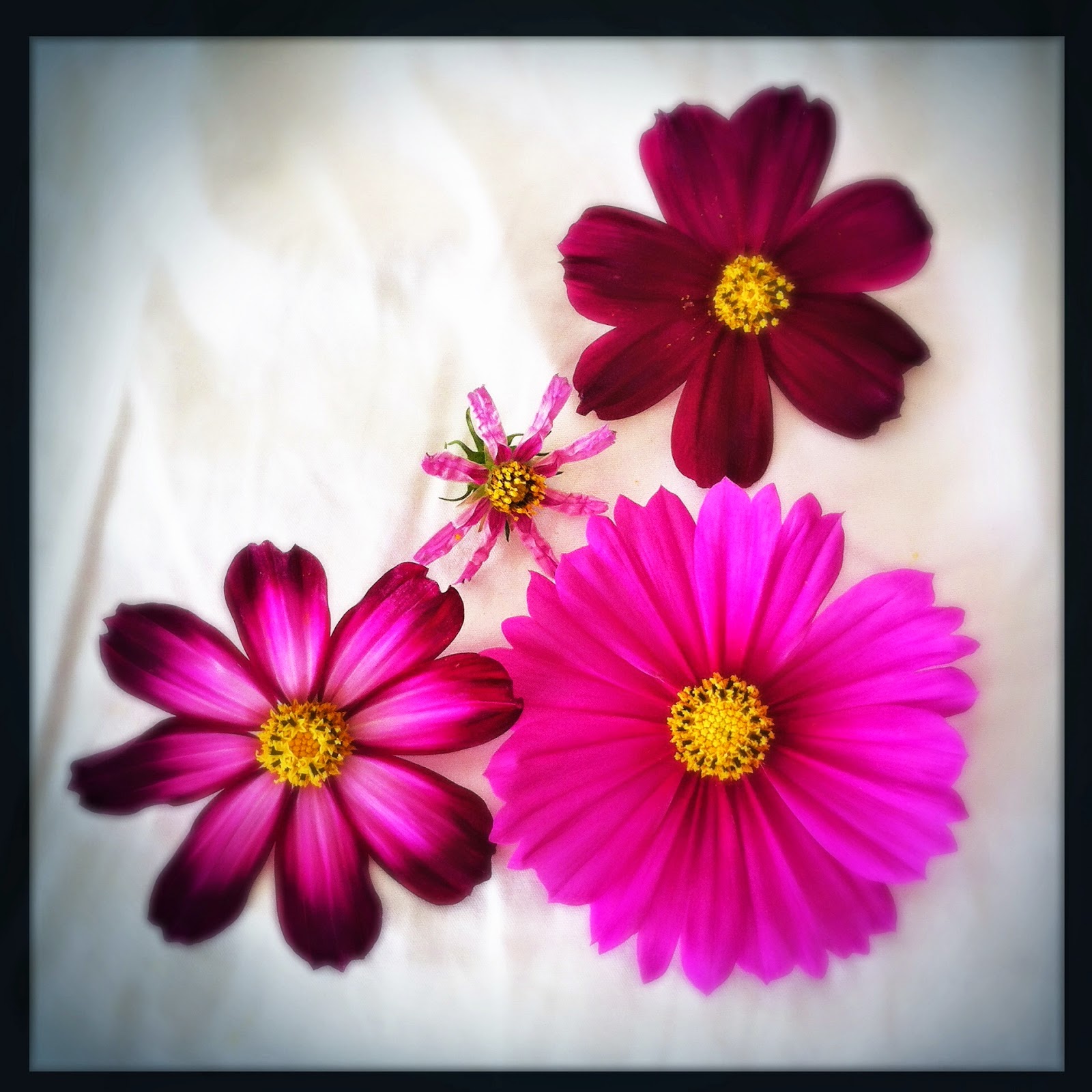 Another Dune day around the big table, the almost-over-summer-sun burning through the morning haze shortly after noon, the air warming to just about perfect, temperate, just short of balmy. C. announced that the lure of Dune is a great work incentive, and he grumbled about not taking the time to bring his lunch, which necessitated a walk down the hill for his meal, which meant we had to pause the recording.  A. settled in to her end of the table, quietly listening, applying masks. I expected to be more excited about this book than I am, but it's about war, essentially, and the war theme exhausts me. I can barely read the news these days without feeling like all the hate/violence/corporate-greed/corrupt-politics is boring into my skull with a suctioning dremel, extracting my brain matter, abrading my epidermis. Nothing seems to change. Maybe it's the onset of Old & Jaded, but whatever you want to call it, it's grim.

But not all grim —

The cosmos (flowers) whose seeds I gathered last summer from a neighbor's parking-strip flower bed have bloomed in a dazzling display of cross-pollination: pale pink with dark fuschia ruffled edges, white with pale pink edges, ruffled white petals with dark fuschia centers, fluted fuschia petals, dark fuschia petals with pale pink centers.....  The variations seem endless and provide daily fascination and delight. If I had my way I'd plant them up and down the street, an entire block of them, the beds eight feet deep, an elixir, a balm against all that is wrong in the world. 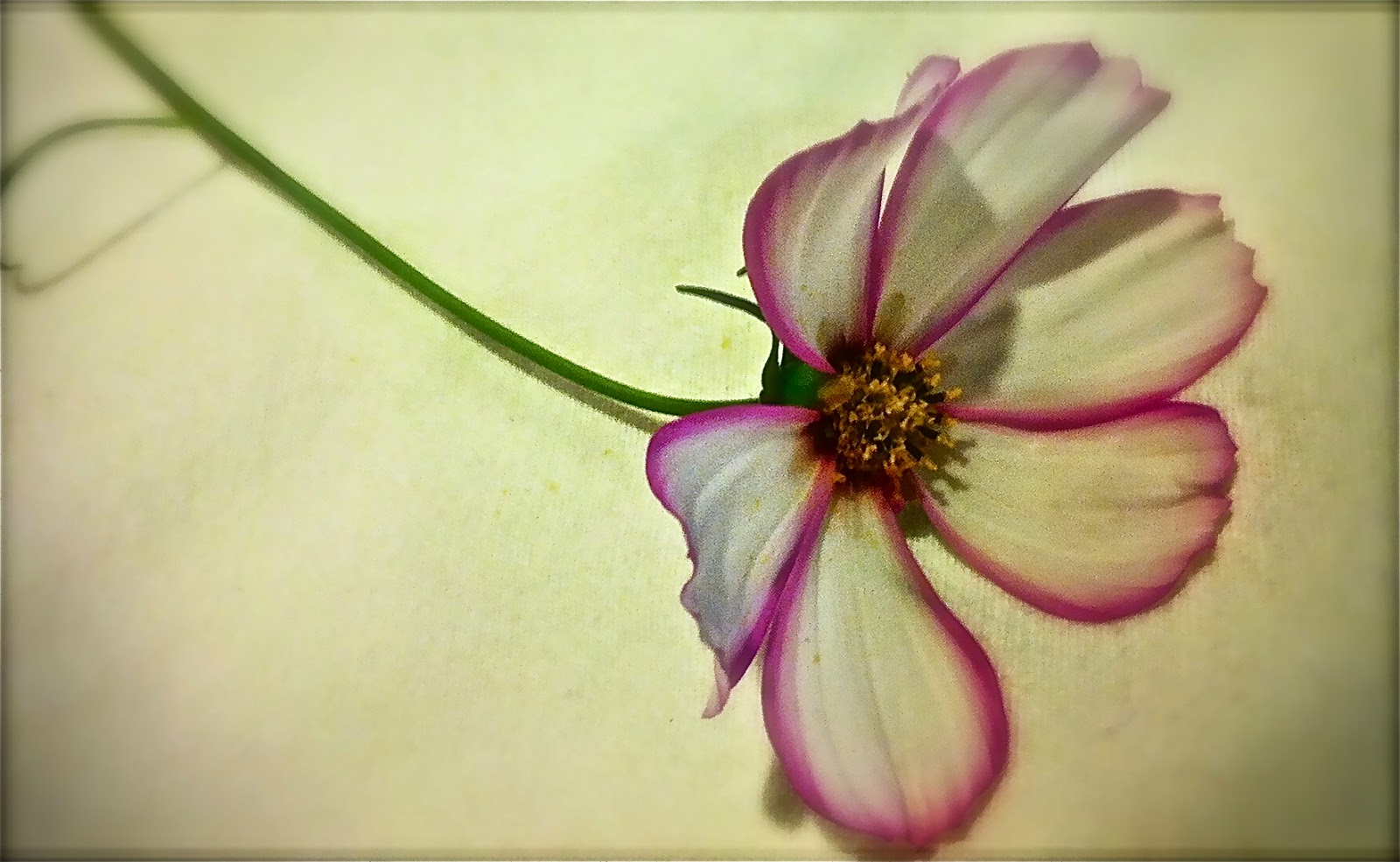 On the Job with Frank Herbert

We listened to an audio recording of Dune, by Frank Herbert, today at work, for at least four hours. It's grim, but Herbert is a superb storyteller and language-spinner; and the production, on Audible, is top-notch. As I'm on my feet a lot, I kept missing pieces of the story, but I think I'm getting most of it.

The invented vocabulary is fascinating and marvelously odd. There is a term that kept coming up— Kwisatz Haderach — which means one who can be many places at once — and every time I heard it I also heard knick knack paddy whack which then evolved into cuisinart heart attack.

No way to explain any of this. No need to. The brain loves patterns.

It's a rare treat, listening to an audio book on the job. We are so rarely all sitting down at the same time, and it's even more rare to be able to go long stretches without the necessity of some work-related conversation.

This book may take months, but no one's complaining.

(And yet another reason why I feel so fortunate to be making art for a living.) 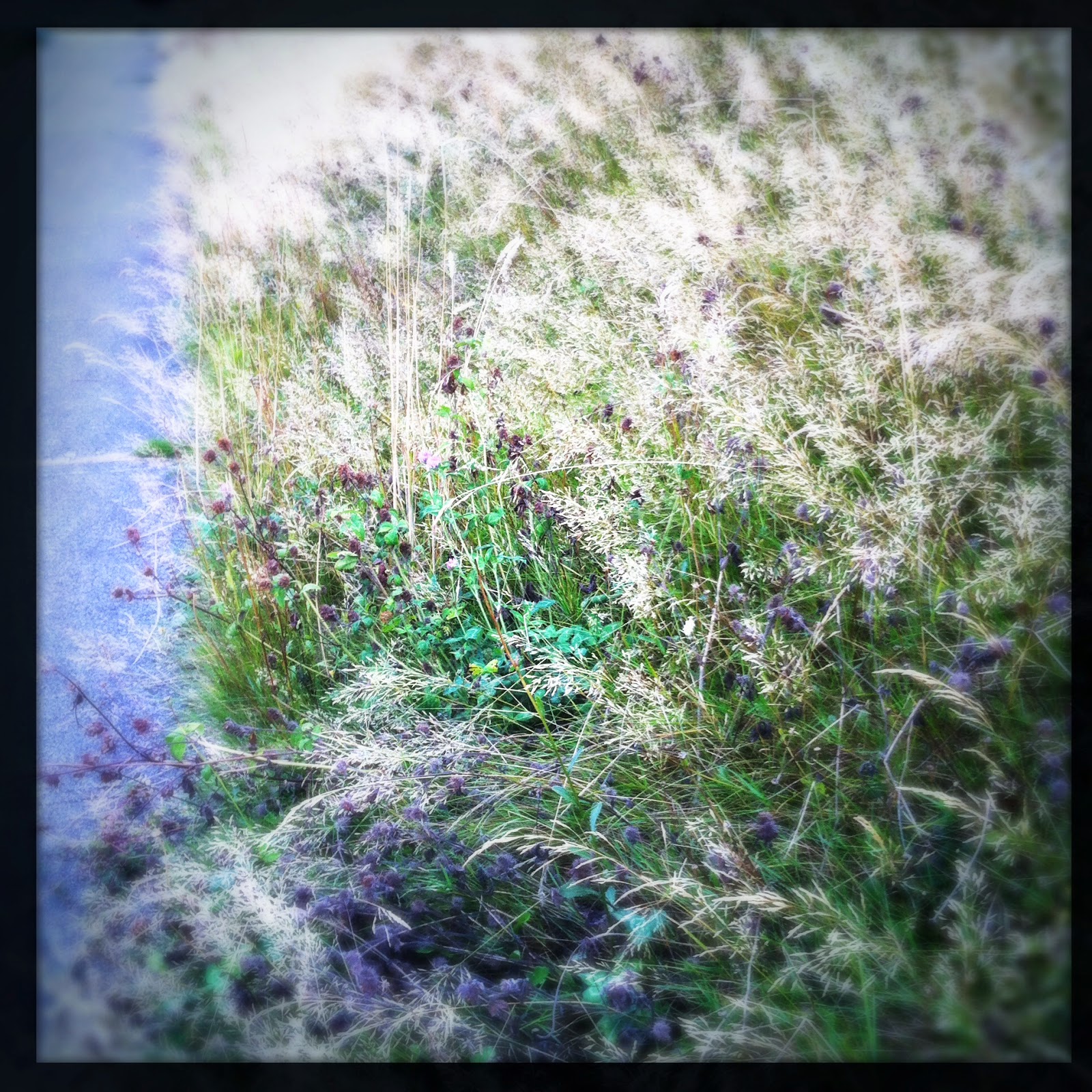 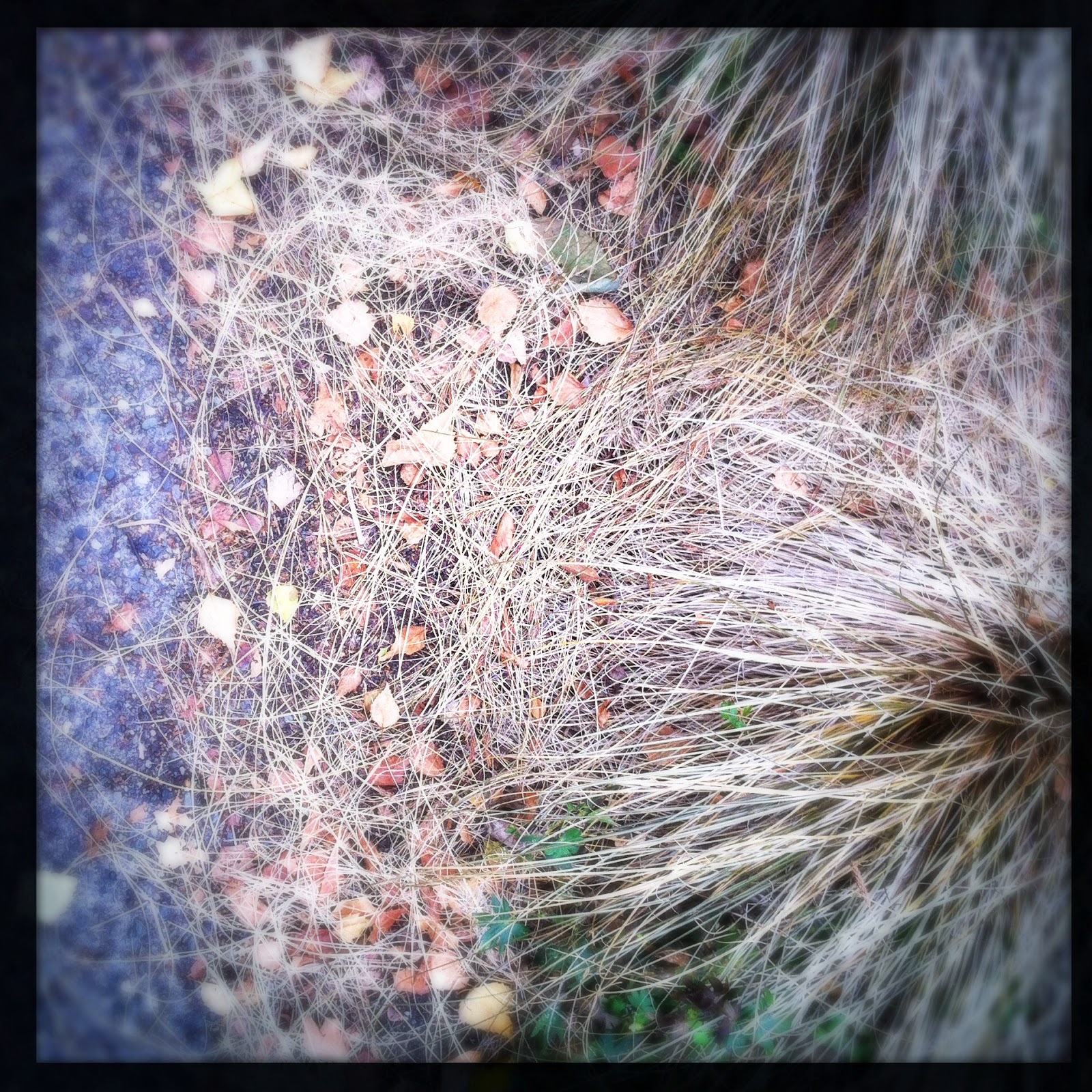 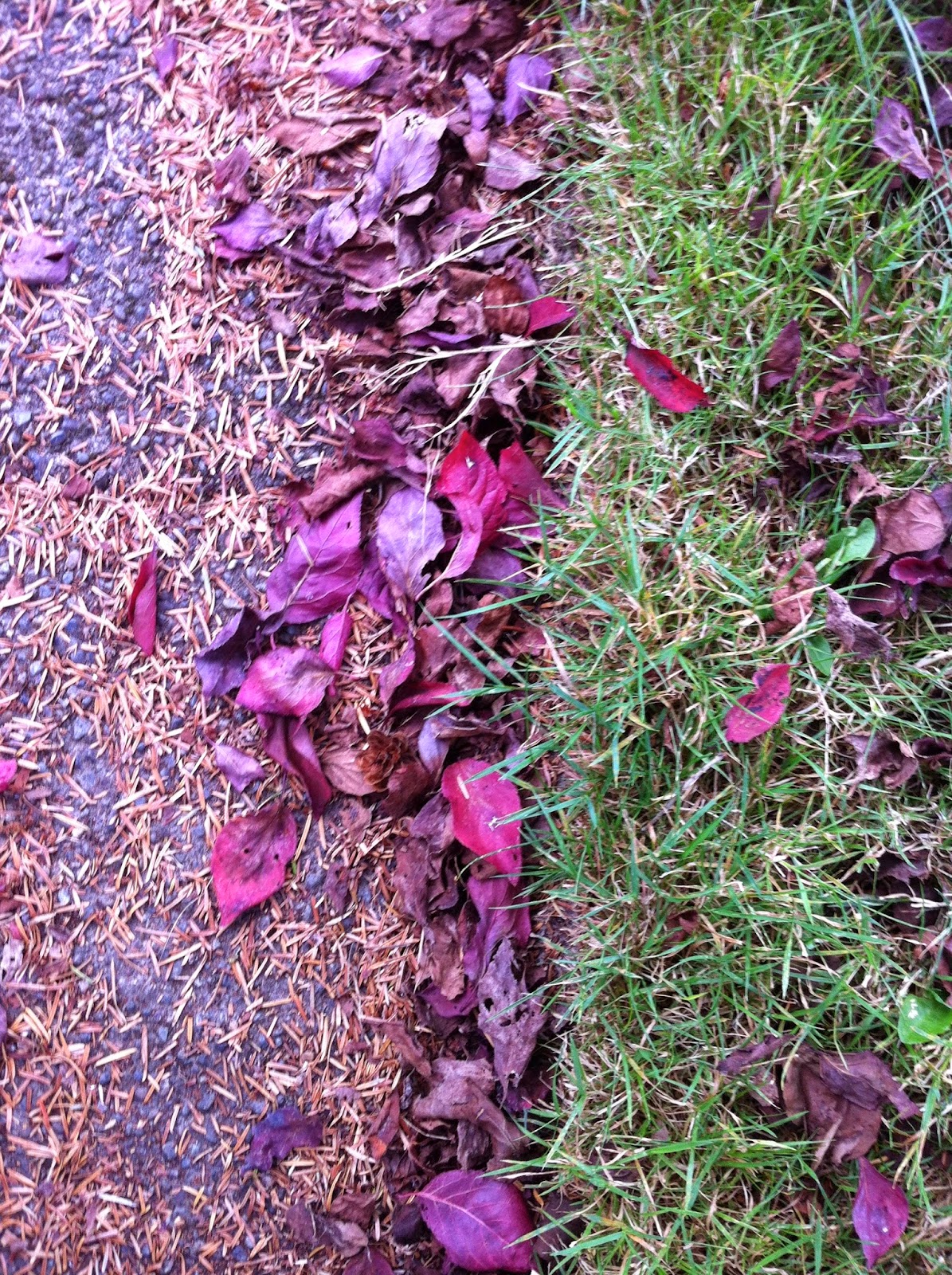 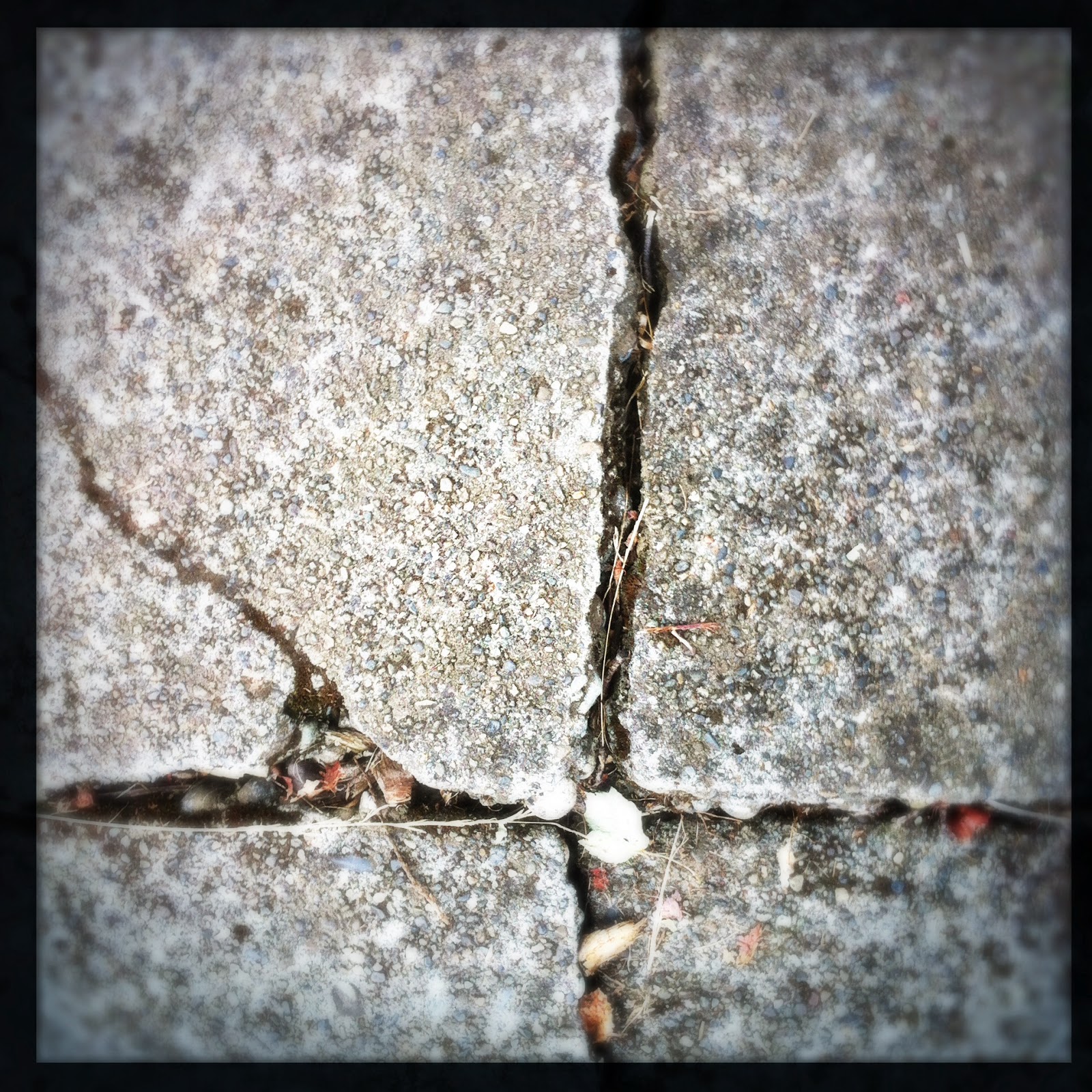 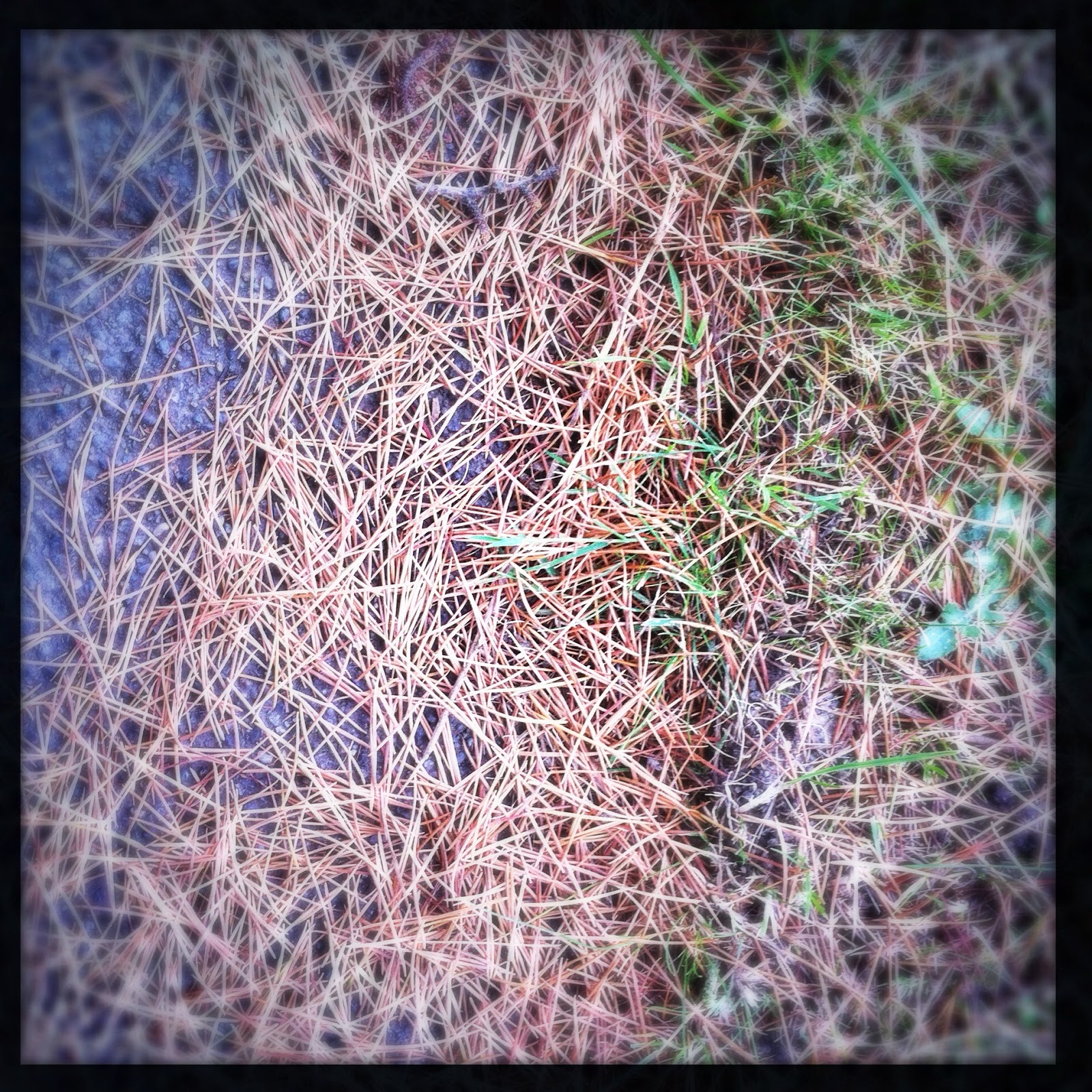 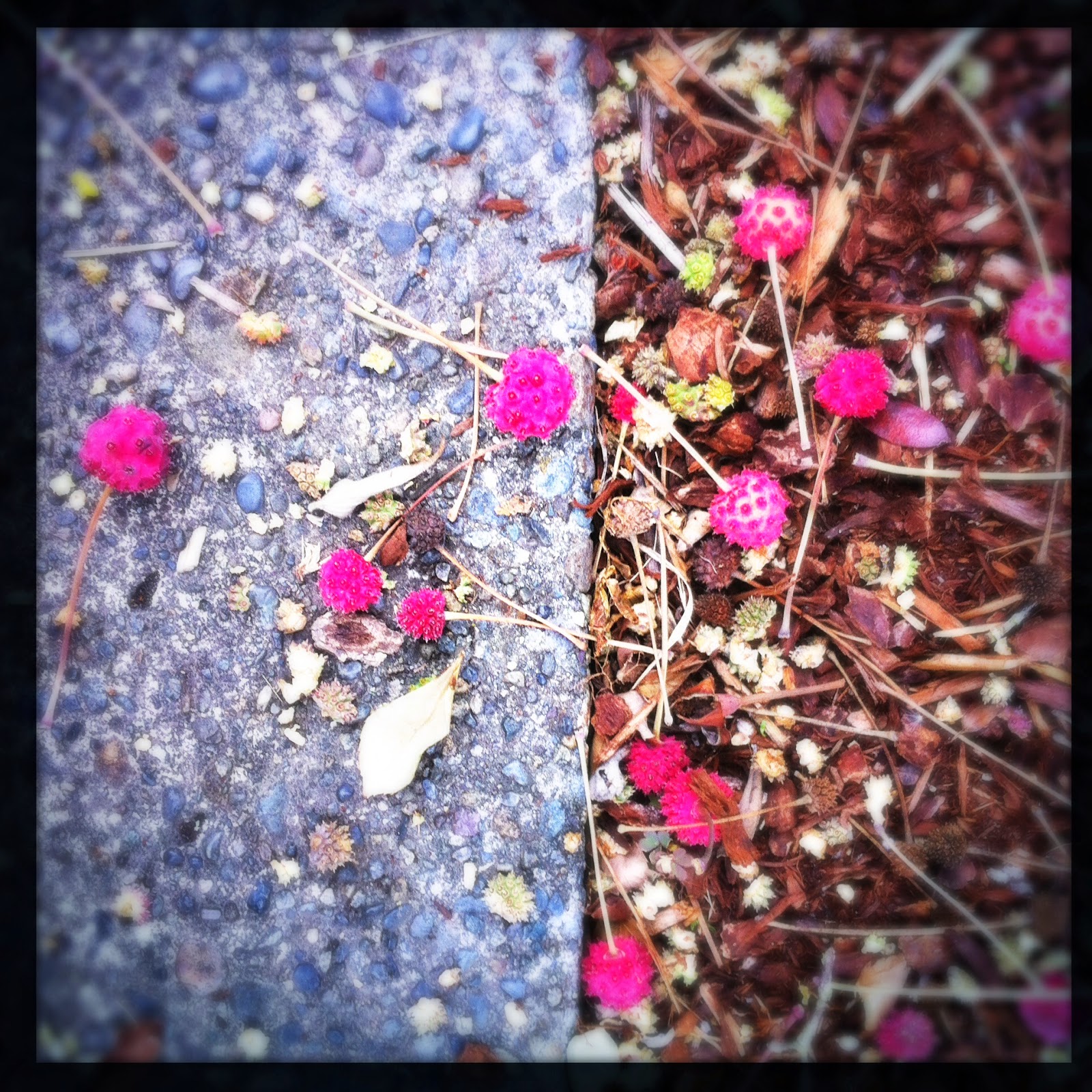 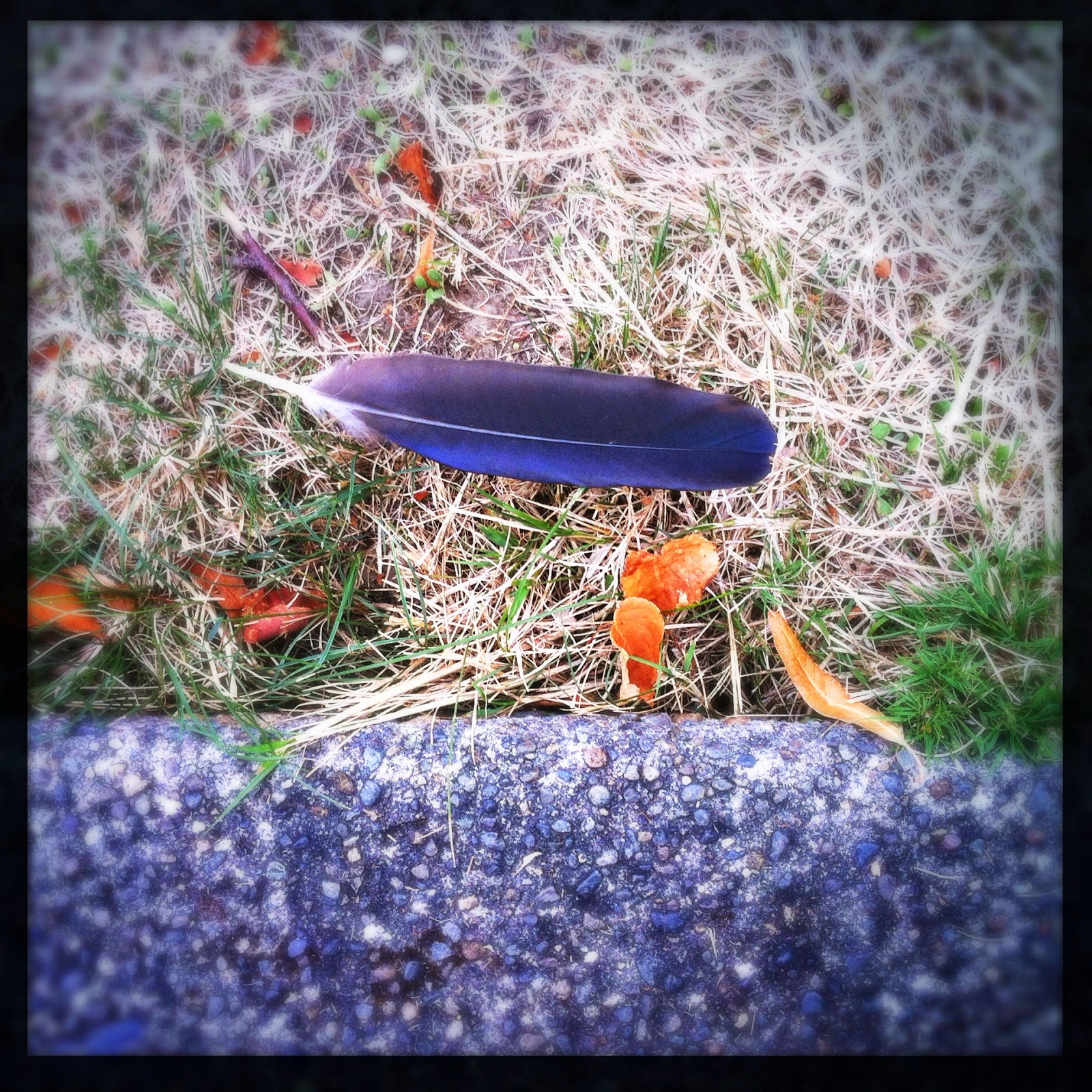 Please Don't Be My Neighbor (please)

This morning there was a knock at the door, and I opened it to an older woman, (she seemed "normal" enough) who told me she was going to make an offer on the house next door and wondered what the neighborhood was like. After extolling its virtues (possibly, in retrospect, a mistake), we walked down to the sidewalk and stood on the boundary between both properties.

"Something's gotta be done about the landscaping," she said. "And look at that fence!" (Pointing to my old lattice fence between houses.) "Is it a fence or not? It goes one way, and then another! I don't know. Will I have to put up a new fence? Is that my responsibility? Something is clearly wrong with that one."

I didn't bother to tell her that it's my fence, on my property, and that when we put it up, it had to veer a few inches from the straight line on one end to accommodate tree roots.

I was looking at it.

I didn't bother to tell her that she was talking about MY YARD. The feral part. Funny thing is, it's on my list of things to work on this weekend, but because it's been 85 degrees, I haven't done it. Yet. But I didn't tell her that.

I was looking at it. It's an 80-year-old Douglas fir which straddles the property line, which is beloved by me, and is ecosystem unto itself, which I did tell her. I also told her that the city came and trimmed that side of the tree, away from the power lines, 20 years ago. And I told her that topping a tree is probably the worst thing one can do, as it makes the tree susceptible to rot from the inside, which kills the tree.

Twenty years ago, a previous owner had approached me about taking down the both the trees on her property, because she didn't like the way they dropped things on the grass and hurt her feet when she walked barefoot. Keep in mind, for the three years she lived there, she went out in her yard possibly 2.3 times, give or take. Anyway, this previous owner and I were standing out on the sidewalk, and the conversation was beginning to get heated, and Mark came out and escorted me into the house.  Of course, I was furious — at both the neighbor and my husband — but nonetheless, the tree still stands.

the cinderblock foundation the carpet I hate carpet I have lung problems I love wood the sewer line the grandkids AND THAT GARAGE THAT NEEDS PAINT [my garage] the dirt the grass the other tree the bidding war why aren't there cute trees planted in the parking strip what's wrong with these people doesn't the city have a program don't these people know it looks cute to have trees in the parking strip up and down the street it shields the houses from cars even fruit trees the paint the siding the the the and and and. . . .

Will You Be My Neighbor?

The house next door is for sale, and today is an open house, so there have been people in and out all day, poking around under things, picking at the siding, peeking a look over the fence where I've been sitting on my deck eating the remains of a brownie/chocolate-chip-cookie concoction that my son made.

The yard next door, which for most of the 27 years I've been here, has been mowed, and that's about it. Last week some yard maintenance people came in to spruce things up, and I swear, they brought out their vacuum cleaners and sucked up every shred of dried leaf from the property. They also mowed down a lovely patch of vinca and severely pruned some shrubs in the front yard, so where my side yard was previously private, it now is in full view of anyone walking by on the side walk. Sigh.

And there are now two Grecian urns on the front porch planted with conical conifers. (Eye roll.) Whoa there, Nelly. Let's not get all fancified here.

Twenty-seven years ago, this neighborhood was boarded up windows and cheap rent. Today it's gentrified and hip, and I fear that I've become one of the remnants of a previous era, kind of a post-hippie oldster with a falling down garage out back and a garden that wants to go feral. (And parts of it does.) Rising property values, rising taxes. The world spins on.

A house on the next block listed this week for $950,000. Um, that's slightly less than a million dollars. A MILLION DOLLARS.

The good news is, despite the fact that my mortgage is inordinately high because of ongoing payments to dead men, I've gained a little equity, so all is not lost.

Soon I'll be leering down from my balcony at the new neighbors, if they're the kind that goes out in their back yard. (I've enjoyed many years of relative solitude outside with stay-inside neighbors.) Who knows — maybe I'll like them, and vice versa. Maybe they'll be the kind of neighbors who aren't averse to sharing a glass of wine or two, in keeping with our B-Street traditions.

Of course, the best possible neighbor would be male, single, late 50's, erudite, literate, easy on the eyes, etc.

I can only hope.

Some days this is enough. 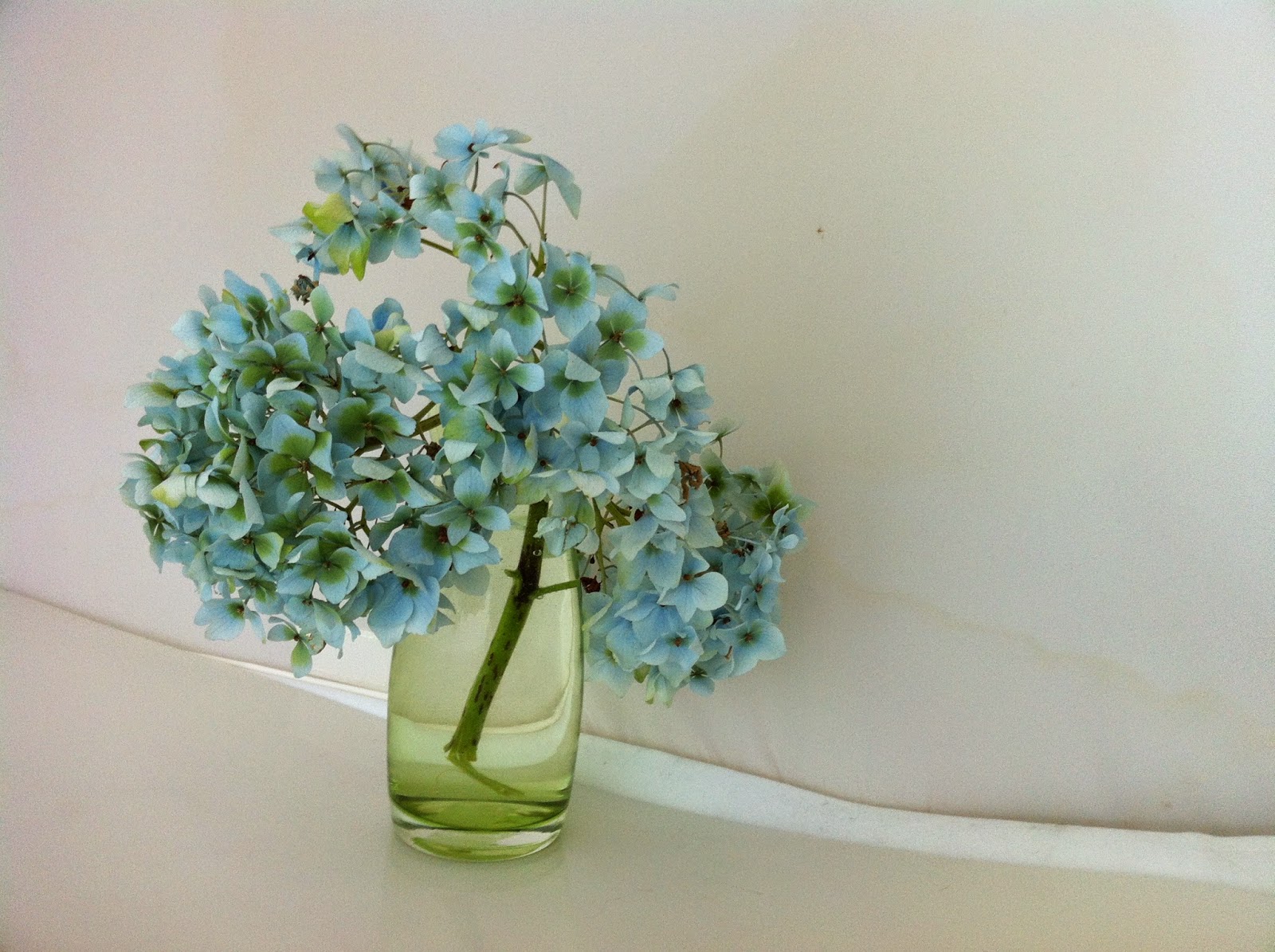