Crust of Bread and Cluck

The Swiss chard is beginning to leaf out, and I snipped a handful of red-veined leaves, slivered them into a chiffonade, added to a green salad. A little balsamic vinaigrette with crushed garlic, a few chives so newly above the soil line that it almost felt unkind to cut them. Can spring really be not so far away?

Winter beats the spirit out of me, reliably. This year was a little better, thanks to my recent hen acquisition. Here we are on the cusp of March and I'm walking home from work in daylight. I swear I hear angel's harps when the light returns, and I don't even believe in heaven. Harps and a chorus of harmonic voices as godlight spills from the darkness. Hallelujah thank you Jesus and I'm on my knees shouting AMEN AMEN AMEN.

I was out in the alley this afternoon trimming back the dead stalks of the helianthus salicifolius, accompanied by a single chicken (Fallopia) who was visibly disoriented in the absence of her two sister-hens (who refused to go out the back gate with us). They are a tight-knit social group, my girls, and the chicken-duo who remained in the yard were scouting out ways to escape to their dirt-bath wonderland on the other side of the house.

Anyway, a neighbor child who is perhaps six was standing in the back of his dad's red pickup (which was parked in the alley) blowing bubbles. Do you know how much I loved this? The red pickup, the boy-child, the bubbles, the solitary hen? (A loaf of bread approaching crisp-crust bliss in the oven.) The only sound was the muttercluck of Fallopia as she scratched the dirt for bugs.

I filled a giant bin with slender sunflower stalks and errant blackberry vines, upearthed some buttercups and dandelions. And it wasn't raining. IT WASN'T RAINING. (We've had record rainfall this winter.) The mud has even begun to recede — it's been nothing but a slick of mudsoup for months. 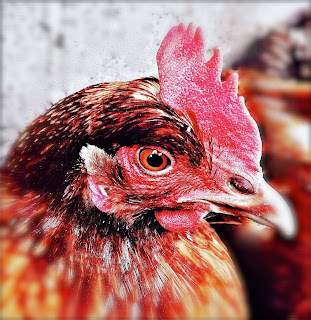 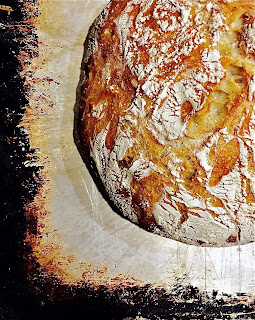 If you had told me five years ago that my life would become reduced* to simple and completely delightful pleasures such as this, I wouldn't have believed a word of it.

*Reduced as in the cooking meaning of the word: to boil down in order to intensify the flavor. An approach to life, really. After all the prep-work of one's 20's, 30's etc., after one's vegetables have been chopped, as it were, and simmered in the broth of days, months, years, then one gets to boil it all down to the essential, to the essence of what is best, and absolutely most delicious —

After herding the chickens back to the coop, I went in and cut myself a chunk of bread,  butter melting into the warm crumb. Poured a glass of wine. I know for a fact that it doesn't get better than this.

Every day there are a few less logs on the parking strip and a heap more sawdust. I imagine someone comes during the workday hours and chainsaws a hunk away. There's no "free wood" sign, but it's diminishing nonetheless.

The best part, though, is the scent: part apple, part vanilla, part fresh-cut wood. It's not like anything else I've ever smelled, really. Honestly, it's more itself than any other scent or amalgam of scents, and I note the distance at which I become aware of it, breathing mindfully. And then I stop when I arrive at ground-zero-log, give the rough trunk a few pats, inhale some more, then head out for home.

I know that in a matter of days these pine-bones will disappear, most likely to be carbonized in someone's fireplace, sent skyward with a puff and a spark. The sawdust will linger for a while before being taken-in by the earth, rain-washed down to brown soggy mulch.

I'll walk here on out in the absence of shade, the air gone stale as old tires.
Posted by T. at 7:42 PM 4 comments:

This old beauty came down yesterday, attended by ropes and chainsaws. I walk by it every day, and mourn its death. I leaned into the giant log-trunk lying beside the sidewalk, patted the rough beauty of the bark. There was so much of it; almost too much to take in. What I really wanted to do was lay down upon its mass. The scent was of ripe fruit — at once surprising and intoxicating. I hope this jumbled log stack remains for a bit, but seeing that it's the city, with ordinances and such, I imagine it will soon disappear. No photos of the amputated stump though — it seemed a sacrilege, an indignity to stand before it with my modern technology and bare its truncated soul. 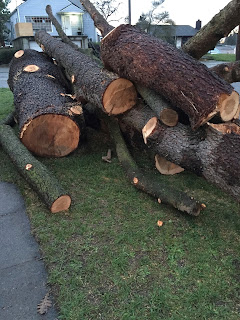 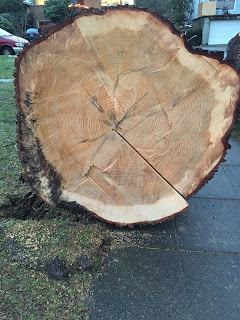 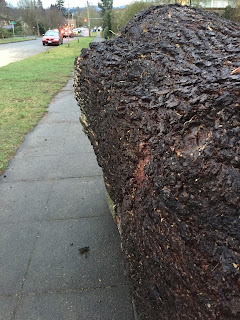 Been ruminating of late on the ordinariness of most days — every day, really. The quotidian, the expected, and the realization of expectations. You put four quarters in the slot and — klunk — down rolls the can of pop. (I think maybe I'm dating myself here on my recalled version of a vending machine, but whatever.)

Within that ordinary lies comfort and ease, as well as boredom and disappointment. Was this what I signed up for?

How many of us go about our to-and-fro trudge to the factory, eat dinner, view a screen, go to bed — the seemingly endless repetition that makes up our routine? Then there's the distraction of a movie on the weekend, a meal someplace other than the kitchen table. A pause in the order of things, a repositioning, only to start it all up again when the week commences. It goes and it goes.

And then there's the unexpected rut in the road, one wheel stuck and grinding the mud.

I found out today that a man I know has end-stage liver failure. Weeks left of his ordinariness, months if he's lucky. A man with an astonishment of talent and perception whose path forward stumbled and collapsed, an abandonment of possibilities. I'm struggling with both grief and anger — anger at the insidiousness of mental illness and alcoholism. Despair as I witness the abbreviation of yet another life.

I'll take the ordinary.
Yes ma'am.
Serve it up for breakfast, I'm hungry.

We lost power Saturday evening for about an hour — dead in the middle of a dark winter night. I was upstairs on my computer when everything switched off. Completely black. I cautiously made my way to the windows which look out onto the street, and the darkness outside was dense and impenetrable — and completely beautiful. With the light from my iPhone lighting my steps, I descended the stairs to the kitchen, and went out the door, careful on the steps, to stand outside under an umbrella of stars.

I couldn't help but notice how different this darkness was from the ordinary, streetlamp-lit darkness we're used to. While the usual urban night always seems cold and harsh, this total darkness was soft and inviting. It settled upon me like a velvet blanket, at once comforting and familiar, despite the mid-winter chill.

How long has it been since I've been away from the electrically-lit night? Too long. It's been a decade-plus since I've been camping. But this darkness was different from forest darkness. This seemed almost a relief, a letting-go from the requisite grid of city standards. A deep exhalation amid electrification, an oasis of calm in an over-lit world.

Tonight, walking home in the dark, I encountered a neighbor on the sidewalk.

"Yes, and oh, it seems darker every year, doesn't it?"

"I suppose it does, but then, we're just getting older, and the darkness is within us."

Here I've been all these past few months railing about the lack of daylight, as if it were something never before experienced. Do we forget, from year to year, that this is the normal pattern? I think we want to forget. I know I certainly do.

And yet there I was, standing outside late on Saturday night, reveling in the wonder of a power failure.
Posted by T. at 9:58 PM 3 comments: