One and a Half Shoe 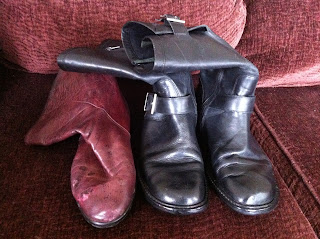 I wish I'd taken a photo of the claim ticket from the shoe repair where I had some sole-work (soul-work!) done on some ancient boots.

Pair #1 is a duo of black-buckly boots I've had since 1999, a gift from a friend/glass-artist/poet who at one time was my employer. Curious story here: at work I'd mentioned to him that I'd seen the best boots ever at Macy's, and gave him an inch-by-inch description of them, and that they were out of my price range, so my covetousness would not be not be appeased. A week or so later, on my birthday, he gave them to me — perfect size! He told me that he'd taken a measurement of my foot by taking note of how much space my feet took up (on his patterned kitchen floor!) as I stood at the sink one afternoon attending to work stuff.

Of course I was delighted beyond belief; it was such a thoughtful gesture and, honestly, they were most likely beyond his budget too, being that we artists claim the lower percentage points of the 99%-ers, generally.

I've had them re-heeled, had seams resewn, really beat the hell out of them for 14 years, so it wasn't a surprise that I wore through the sole in one of them. Thinking ahead, I brought both of them in for resoling.

Pair #2 was purchased during honeymoon #1 in the village of Le Puy, high in the mountains in central France, in 1983. The right boot had come unglued, sole-to-body, so I brought that one in for repair also.

Three boots, one and a half pairs, and the cobbler — a lovely gentle-natured man named Seung — wrote on the ticket: 1 1/2 shoe.

Well, of course, this pleased me to no end, the notion of bringing one half of a shoe to be repaired! When I picked them up yesterday, I handed him the ticket, and said I was there to pick up my three shoes. After considerable confusion, he corrected me: 1 1/2 shoes.

Too difficult to explain my amusement, when he meant none, and there were language barriers.

This morning I put on the "half" shoe, along with the other half, delightfully walking to the coffee shop in my 30-year-old French boots.

And, lo and behold, the sole on the other half was soon flapping along the sidewalk, disassembled, unglued, its sole wrenched loose of its bearings.

Next Saturday, it's another trip to Seung, this time with my other 1/2 shoe.