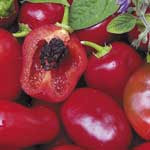 It's pepper season at MacPherson's Produce, and yesterday
I bagged a bowlful of red, yellow and orange rocoto peppers,
because the sign said " sweet and mild." While Nelson and I
were cutting them up (really beautiful black seeds!) I started
to cough and cursed this two-week cold. Then Nelson began
to cough. Then my hands began to burn, but I didn't think
much of it. We tossed them with balsamic vinegar and olive
oil, the roasted them with some cipollini onions. When I opened
the oven to check on them, I got a rush of heat -- not from the
temperature of the oven, but from the peppers --
and actually burned my face, mildly.
These were not mild peppers!!
N. tasted one and confirmed this. Yowza!
We plan to turn them over to the Hot Sauce King, Reilly.
He'll transform them into something of wonder, I am confident.

Newer Post Older Post Home
Subscribe to: Post Comments (Atom)
"What is the meaning of life? That was all — a simple question; one that tended to close in on one with years. The great revelation had never come. The great revelation perhaps never did come. Instead there were little daily miracles, illuminations, matches struck unexpectedly in the dark. . . . "
—Virginia Woolf, To The Lighthouse