Nine years ago, when my sons and I were faced with celebrating Christmas minus their father, we decided to begin new (and wacky) traditions, in part to honor him (he was wildly creative) and also to acknowledge and accept our revised family. No wallowing in the past!

The tradition that has lasted is our annual gift-wrapping contest, where each of us wraps at least one gift in the oddest way possible.

In these intervening years, each of us has developed our own particular wrapping style: Reilly mines the kitchen for discarded cereal boxes, lengths of foil, duct tape. Nelson goes the route of glueing-things-to-other-things. My style has not evolved so much as been a last-minute grabbing of whatever I can find that is odd. (One year my entry was wrapped in pages from an old dictionary.)

So, last Sunday I got an email from my friend J., who wrote that he had an idea that would pretty much guarantee my win: he'd help me construct a glass box in which I could entomb a small gift.

Christmas Eve we met at his house, and using plate glass and a scoring tool, he snapped out six rectangles — 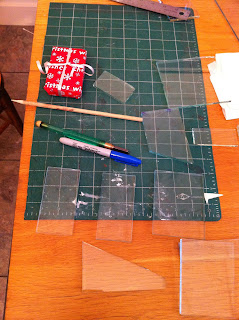 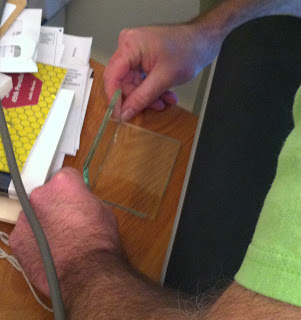 Before gluing the last pieces, I slipped the present within – 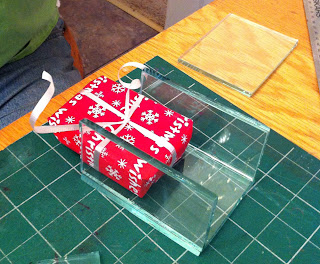 Back home, I wrapped the glass box — openable only by breaking! — into several other boxes-within-boxes to ensure surprise. 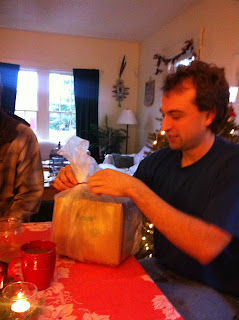 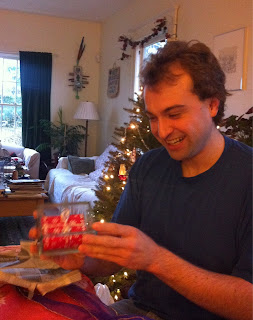 and couldn't stop for a mighty long while — 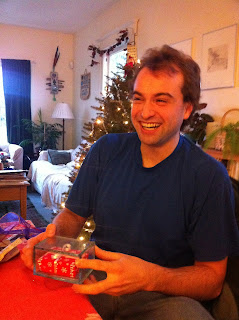 The caveat: I wouldn't be a truly tortuous mother without messing with his head just a bit more. I told him that if he breaks the glass, he'll discover what is inside. But if he doesn't break the glass, the gift will be re-upped next year, as long as the glass remains unbroken. If he guesses what's inside, he still qualifies for re-upping. And either way, he gets the gift.

breakage = only this year
no breakage = a continuing gift

And I told him to give it a few weeks; he may just figure it out.

Any guesses from blogland?