The five-photo sets recently posted here ("Abandoned" and "The Ghost of What Remains") were taken in a yard and house a mere thirty steps (give or take) from where I sit typing. I've written on this subject before, here and here.

This week I emailed Mary's brother, sent him a link to "Abandoned", and asked if he would mind if I went into the house and took more photos. He said he didn't mind — I promised not to disturb anything. We spoke later on the phone, and he insisted that he's not keeping the house as a shrine to his dead sister, but that his life has been very complicated these past 6+ years, and he'll eventually get around to dealing with it. (He lives out of state.)

I also asked if I could have the weather-worn Virgin of Guadalupe, and at first he said yes, but then changed his mind, that he didn't want others getting the idea that things could be carried away from the yard.  (He said that he would let me have her at a later date.)

Worried that someone else would walk away with her— and this is silly because it's in the back yard embedded in pine needles, and disappears in the weedy growth all spring and summer, and the fact that she's been sitting there all these years — so I thought I'd put my name on her and move her into the shed, or the house.

Well, this idea was met with a resounding "NO!" by three close friends. Worries about upsetting the karma, of causing a ripple in the energy embedded therein.

Walking through the unheated house yesterday, I knew they were right.

The only ghosts I encountered were the ghosts of objects — indeed, the ghosts of what remains. All the implements of living — from spoon to toilet plunger to shovel to television to bed to bath mat to sink to hot sauce to candle — at once ordinary yet holy, plain but imbued with the sacred utility of being alive — 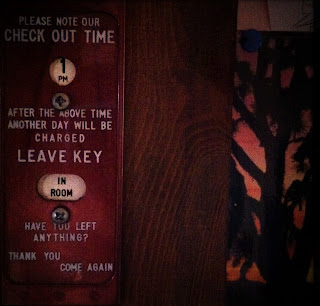