We sailed across the Salish Sea, my oldest son and I, for Thanksgiving dinner, delayed by long ferry lines and fog. I worked in the morning, layering color with hog bristle brushes: sap green, perylene maroon, lamp black. A swirl of Aztec gold. A holiday means a half day of work, the rest to be made up on Saturday.  It costs a lot to live in Seattle.

Departing the dock from downtown, a slight thinning in the clouds allowed a momentary view of just the tops of a few buildings — 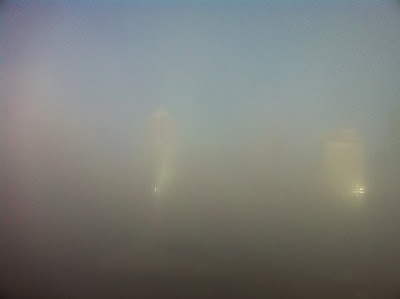 Eerie, elusive, my city quickly faded from sight, and we glided silently through salty waters with nothing to mark our place on the planet. All trust given over to the boat's crew.

On land again, late afternoon, we drove the eleven miles to my sister's house through forest and rural pastureland, the fog our enduring companion as darkness settled in amongst the alders and firs.

Hours later, stuffed and sated, we reversed our journey, only this time the wait was in a queue on the side of the road in the dark, car after car compliantly lined up, each awaiting its turn, each filled with passengers much like us — trailing the scents of things mashed and salted, things heaped with cream, the diminishing essences of champagne and coffee.

Only an hour there in that darkness, every so often starting up the engine to roll ahead a dozen feet, to stop again, and wait some more.

When finally our turn came to board the ferry, we drove all the way to the front of the boat, and remained in the car, worn from the day's bustle. A crewman jacketed in reflective stripes stood at the prow, in front of the main car deck and in direct view of the bridge above and behind him, where he kept watch for channel markers, every so often signaling dramatically either left or right. I thought: there must be radar or GPS some other more sophisticated method of navigating the MV Tacoma, a Jumbo Mark II Class Ferry, which can carry 2500 passengers and up to 202 vehicles as it crosses the 202-feet-deep water between Seattle and Bainbridge Island. Again: our absolute trust. I noted the location of life preservers and then felt silly: the water was so calm I could barely even perceive that we were traveling. And how lost could we get? The distance from departure to destination was a mere 10.1 miles.

But there's something about darkness, and then the fog within the darkness, that wants to strip us of our bearings, radar or no radar. GPS be damned. Enveloped in fog and the blackness of a November night on the Salish Sea, we're all helpless, vulnerable idiots.

The fog rolled in through the open car decks, spectral, chilly. I got out once to check if there was anything more to see out in front of the boat other than what I could see from my car, but it was the same: nothing.

About when I thought that Seattle must be coming in to view, she did, faint yellow lights piercing the fog, becoming gradually brighter: the Space Needle, the giant red "E" of the Edgewater Inn, the neon lights of the giant ferris wheel (which weighs 280,300 pounds) on Pier 57: a dazzling spectacle, all of it, as it emerged from sea-level clouds.

And then something more: a flock of cormorants, apparently roused from their saltwater slumber by the boat-roiled waves, flew directly in front of us, one after another, groups of two and three, perhaps several dozen birds in all, black winged figures silhouetted against the Seattle skyline.

My son and I were both stunned into silence —

I exited the boatyard onto Yesler Way, drove a straight line three miles or so to the crest of the hill above the city center, then looped and switch-backed down steep lanes all the way to Lake Washington. Wound my way home along the unlit waterfront drive, endlessly in love with my city.
Posted by T. at 10:44 PM