A quartet of us on the job yesterday, and the conversation zigged and jagged every which way. Amidst the loading-up and unloading of boxes of glass, the packing for the Philadelphia show, the box-building and box-dismantling, the heaving and the hefting and the wrangling of packing peanuts -- all the to-and-fro-ing required to keep a small business ticking -- some days we do all manage to sit down at the same time at the long sturdy wood table where all the painting and the detail work happens.

Thursday's conversation began with an elementary (or, more accurately, kindergarten) discussion of Quantum Physics. (I say elementary because none of us are scientists, and I doubt any of us took a physics class in college -- though I may be wrong here.) I'd done some introductory reading about parallel universes the night before, and discovered, quite literally, an entirely new world out there. Or, even, several new worlds. I kind of like the notion that we're floating around up in the clouds on a magic carpet membrane. (Like I said, elementary.)

A part of me wants to believe that my epic recurring dreams, some recurring for 30+ years, with settings and characters that reappear and develop with each night's chapter, are indeed plucked from the parallel universes that I inhabit out there in Quantum Physics Land. I want to look beyond Freud and Jung to find not greater meaning, but greater explanation. I'm bored to tears with symbolism!

But I digress. Back to the conversation:

1. As I stated, Quantum Physics, multiverses, etc.
2. Did you know that if you're a middle-aged woman who experiences severe hot flashes, your chances of developing either of the two prominent types of breast cancer are greatly reduced?
3. Supreme Court Justice Clarence Thomas.
4. Supreme Court Justice John Roberts (who was the best man at my cousin's wedding).
5. Cognitive therapy.
6. The Seven Deadly Sins (a list of which now appears on the parchment which protects my work surface).
7. The fact that all of us are guilty of all seven.
8. The Ten Commandments. (Don't you just love the word covet? It's highly underused.) Three of us have not coveted thy neighbor's wife, one of us has.
9. Carlos Castaneda.
10. Acid.
11. Text from my husband: "hematopoetic". (Written in blood??!!)
12. Dog treats made from buffalo penises. (Not sure if these are actual in-the-flesh buffalo penises or if they've been ground up and reformed.) R. was in the other room when this subject was introduced, and she heard, instead of buffalo penises, "buckle of peanuts". (Interpretive Hearing is a common occurence at my job.)

And when R. isn't pondering belt buckles fashioned from legumes, she dons her barista cap and treats us all to cappuccinos. Yesterday C. treated us to amaretti. 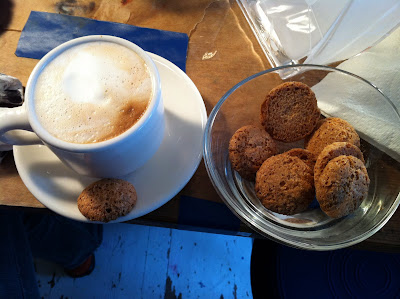 And when the verbal soundtrack became too frantic, as can happen, R. queued up some tranquility on her iPod, and we settled it down to a soothing Erik-Satie-pitch.

It's not all fun and games, but we can damn well pretend it is.