On a ladder, tangled in my hazelnut tree with a Japanese saw in one hand (and I was wearing a skirt) and the grave of a cat below me: a pair of hummingbirds visited, swirled about me, swooped and dived and performed winter acrobatics while I reached high up and cut a single branch, which caught in the twig jumble. Stuck. I climbed higher on the ladder so as to get some leverage, pushed the damn thing down into the neighbor's yard. I retrieved it, opening the neighbor's eight-foot-long gate which felt as if it hadn't been opened in many years. Dragged the branch up the alley and into my yard, up on the deck and in to the kitchen where the cats scattered, spooked.

And the hummingbirds? Sipping deeply of sugar-water nectar from the glass feeder hung on a hook above the dead sunflowers. (The chicadees and Oregon juncos sounded alarms when one of their branches fell. Clearly they were distressed!)

There's a hazelnut branch hanging from my living room ceiling now, strung with white lights. It was more work than a tree, involved yet more ladder-climbing, a trip to the hardware store, a drill, anchor bolts, 19 gauge wire, plyers, cursing.

I am a reluctant handyperson. 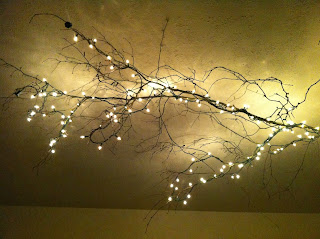