The guy at the cable store today had a tattooed wedding band with the name "Eve" in blue ink around his ring finger. I exclaimed at this — in the middle of trading in my old non-functioning cable TV gear for new fancy shiny boxes (and believe it or not I was excited about the fact that after three years of no TV I was going to be getting the most basic of all cable TV possibilities) — and I said,

"What if you get divorced?"
And he said, "We did."
"Really?"
"Yeah. No regrets. I'd have a bigger problem if I had a tattoo with a misspelling. Anyway, what have you been doing for the past three years without TV?"

How to answer this? I mean, first of all, the notion of a wedding band tattooed onto one's finger — there was no way I could respond to this. And the issue of no TV? How could I explain that the only thing I missed was Wheel of Fortune and Jeopardy? A few random advertisements? And that it took me three years to get to the point of missing them? How could I say to a stranger that I've spent this time engaged in frenzied writing, in deep and entrenched periods of thought and processing? I couldn't explain. I don't remember exactly what I said, but I mumbled something, of little consequence. For the most part I've eschewed TV, not wanted TV, not needed TV. But now, there's a tiny part of me that wants to be part of some larger group activity, part of the group of us boomers that sits down at 7pm (on the west coast) and watches Pat Sajak (who makes $8,000,000 a year)  and Vanna White talk about inane things and spin wheels and witness people buying vowels. Can I buy a vowel? I've always been fond of "o". I want to buy an "o".

I didn't say any of this to the Eve-tattooed man, just took my shrink-wrapped modem-thing-a-ma-jiggie and new remote control device and high-tailed it outta there, excited for wheels containing fortunes. Not my fortunes, mind you.

But there are other paths to gold, and mine, today, took the form of raspberries, at 99 cents a cup, at the fruit stand. Not local, and most unseasonal, but damn good and ripe and perfect. 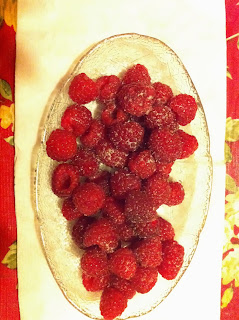