At the grocery store today a woman spontaneously said to me: "I love this music! And I don't even celebrate Christmas!" She was a breath of fresh air as she snatched up a bag of yellow onions and deposited them in her cart.

At the pet store, a man disguised as Santa was available for "Pet Portraits with Santa". When he stood up, his belt, which bisected his well-stuffed torso, cut him in half horizontally and he appeared to be sporting some very generous bosoms.

At the craft aka crap store, I saw a wreath made out of peacock feathers. There was one that was blue/green/black, and then one that was in shades of red. Uh, red peacocks? I think not. They literally stopped me, silenced me, they were exquisitely beautiful. But I just couldn't bring myself to buy one, dead peacocks et al. 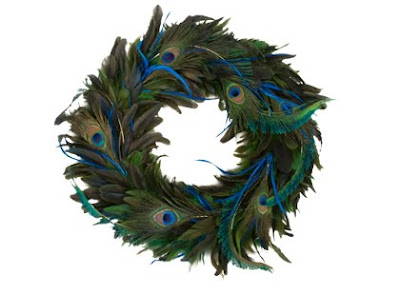 I wandered the aisles (trying hard not to do a peacock call) amidst the chaos of artificial Christmas, in search of candle holders, but came up short. I think I'll carve some out of red apples -- I've done this before, the only trick is getting the hole the right size so the candle doesn't wobble. I'll level each apple with a neat trim across the bottom, et voila! Bingo. Candle holders. Compostable candle holders.

The only small animals at the pet store were mice, rats, Guinea pigs and ferrets, so I lingered in front of the aquariums for a long time. I've never had fish save for the odd goldfish which, for some reason, upon its certain death, got flushed down the toilet, but I was so taken with these lovely shimmery critters that I actually looked at aquarium hardware. Too much work, though, I think.

The parakeets were equally lovely, particularly an-almost completely white one with blue underpinnings. Again, too much work.

As a child I spent a lot of time in the pet department of our local W.T.Grant store, which was an easy walk from my house. It's been an age since I looked at fish and birds, and I don't know exactly what compelled me to do this today, but it was the perfect antidote to the rain, the Saturday traffic, the holiday frenzy.

(When I mentioned to Paul that I didn't buy the wreath because all I could think of was dead peacocks, he said, "well, maybe they, you know, just fell off....") Hmm. I might have to make a trek back to the crap store and get one tomorrow. And, if I get tired of it as a wreath it could easily double as a hat.)
Posted by T. at 6:03 PM