The last thing I wanted to do today after work was go to Safeway. It was a draggy Monday, and I suffered from a dearth of energy (owing to my non-stop [alas] weekend). I slogged through every minute of every detail of August 20th from 9:20am-5:05pm.

But essentials were in demand, and I wrenched the steering wheel northward instead of my usual easterly single-mile trek home, and pulled into the manic, rush-hour parking lot of a mega-grocery in the heart of Rainier Valley.

Inside, there were no small baskets in sight, and I hunted among the check-outs until I found a tidy stack. Forced a tunnel vision to avoid "Strawberries! $1.99/lb." and whatever else the local comestible marketing geniuses had dreamed up to distract me from my mission to get a)deodorant, b)peanut-butter and c)yogurt. Wait! Cat food! And evaporated milk! And Aleve!

Knowing I was forgetting something (in this case it was dishwashing liquid), I chose the shortest line, and began to unload my few items onto the conveyor belt. An elderly woman was in front of me, struggling to get her items from her rolling cart and onto the counter. I offered to help her, and the minute she turned to me and said, slowly and deliberately, "Well, yes....", I knew that it was Mamie.

She confirmed that she was indeed Mamie, and I nearly cried for joy.

When my youngest, Nelson (who just turned 24), was an infant, I had no choice but to go back to work 8 weeks after his birth. A nearby daycare center seemed a reasonable choice, and Mamie was in charge of the infant room. She was warm, capable, gracious and possessed a loving and generous sensibility. And although I felt as if I was abandoning my baby to the care of strangers, Mamie quickly put my fears at ease. Once I got to know Mamie, I realized that the bundle of gold my husband dropped off each morning at the daycare was going to be cherished all day long, every last minute.

Mamie truly loved "her babies". And Nelson settled into the arms of a pro — Mamie had raised six children of her own.

While chatting with Mamie this afternoon, the purpose of my mission to Safeway fell to the wayside, and I suddenly realized that we were holding up a growing line. I apologized and explained to the woman behind me, who spontaneously shared with me her story:

Many years ago, she was in the hospital battling a rare illness, on a respirator with a questionable prognosis. One day, a woman (who never identified herself) visited, and shared that she too had this illness, but had recovered and was now leading an active life. The woman in the hospital bed burst into tears, and was unable to speak — tears of gratitude for the gift of hope this stranger had given her. The stranger, thinking she had upset the patient, abruptly departed, not allowing the patient the chance to explain that her sobbing was for gratefulness.

Twenty years later, both women ended up sitting side-by-side in an art class. There was immediate recognition, and a long-overdue expression of gratitude from one healthy woman to another.

(More people were now lined up behind us.)

I thanked her for her story — wanted to hug her, really. She twinkled her eyes, a moment of grace.

Then I eased Mamie and her groceries out of the store and into my car (she was planning to call a cab), and drove her home.

I asked about her family, and she said, "I raised three sons and three daughters, and my three sons have all passed away."

How could I possibly respond to that when everything I wanted to say seemed inadequate? Here was the woman who'd cared for my infant son as if he'd been her own, and yet her own three sons had already left this life. I was sitting beside a woman whose existence contained exponentially more sorrow than one should expect to endure in a lifetime. And yet there she was — cheerful, smiling, ever-gracious.

I wouldn't dare ask Mamie her age — that seems to be a closely guarded secret among many woman of her generation, and I have nothing but respect for Mamie.

I pulled into her driveway — she lives alone in the same house where my late husband used to pick her up and drive her to the daycare along with our two sons — and helped her out of the car. She moved slowly and with what is obviously tremendous pain. I took right hand and she maneuvered her cane with the other as we traversed the uneven terrain of her lawn, inches at a time.  She told me she could manage the steps on her own. And although I carried all 5 bags of groceries to her porch, she insisted that she bring them in herself. I did not want to leave her alone with those bags, but respect won out in the end. She insisted.

It's been many years since I've seen Mamie, perhaps twenty. When I saw her in line in front of me, my first thought was, that can't possibly be Mamie. But it was.

There was a reason I went to Safeway this afternoon, and it wasn't — apparently — only for peanut butter. 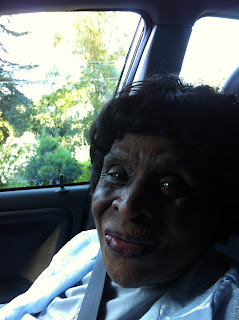