Sometimes, when someone is having a heart attack,
it's dismissed as heartburn. And then again,
the opposite can be true. Now, I don't know
how often it has happened that the meds used
to prevent myocardial infarction
actually contribute to the symptoms
of heartburn, which are mistaken
to actually be a heart attack....is your head spinning
a little bit there in this weird circle?
Dizzy? Is your kitchen prepped for pickles?
Nitro, anyone?

So. In the midst of pickling, R. and I
were surrounded by a bevy of EMT's
and flashing red lights and a drive over the bridge
in Friday rush-hour traffic to revisit the ER.
Nine-eleven. Eerie as hell.
And yes, all is well.

When we got back to the house last night,
I decided to go ahead with the pickling
in spite of the late hour. Can you say crazy?
Crazy crazy crazy. (Go ahead, say it!)
Craziness compounded by the fact that my stovetop
is on the fritz and can only be controlled
by switching the breaker on/off.
And won't heat properly....

Hours, hours later, my dozen pint jars
of dill pickles sat cooling on the counter,
belying the drama which just hours before
swirled about them like jalapeno spiced vinegar.
Ho hum.

(Ho-humble pickles which must simmer
silently in their acids for two months
before we consume their flesh.)

And so, without further ado,
I present to you my 911 Dills: 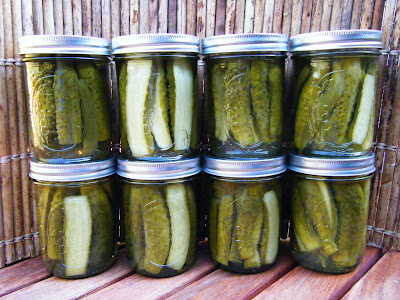 These look not unlike the photos I took this summer
of Irish tidepool flora & fauna: