Dinner was lavish and decadent last night,
yet we seem to be establishing a history
of forgetting to cook the green vegetable:
on Thanksgiving, the green beans languished
in the refrigerator, and yesterday the broccoli
suffered the same fate. To compensate, there was
red-tipped butter lettuce with diced beets -- 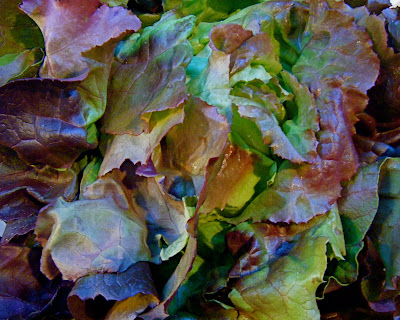 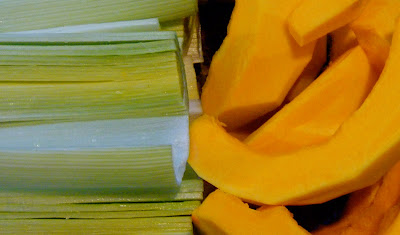 -- and fingerling spuds that lingered just long
enough in duck fat to achieve near-confection
status. The four men (I LOVE being the only
woman in the current group) wolfed down
the bloody lamb with nary a growl. They earned
points for keeping their lupine instincts in check.
I, on the other hand (other fork?) delicately nibbled
on a duck appendage which had been rubbed with
Chinese five-spice and who-knows-what-else by
Chief Culinary Wizard Riles -- 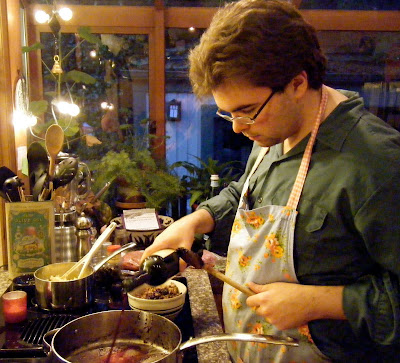 (who stated in no uncertain terms that this is the
one-and-only time he'll roast two meat-products
simultaneously in a single oven).

I entertain a fantasy from time to time that a holiday
will occur where we'll fix something quick'n'easy
and arrive at the table ready to enjoy the meal
rather than longing for a nap by the fire.
But in the end, we do love this hours-long kitchen
encampment over the electric flame, although
I must admit that a question has arisen which I
feel compelled to share: Just when was it that
I became the prep cook for my son??!!!!

For dessert there were Oeufs a La Neige (thanks to
Radish King for the link), a version of Ile Flottante
aka Floating Island, but I let the chocolate/cardamom
sauce cook a second too long, so it was more of an
Ile sur La Terre (island on the earth). I was reminded
by the aforementioned Wizard that islands do not float,
so therefore my sauce-turned-pudding was forgiven.
(Has anyone else on this planet poached spoonsful
of meringue a few minutes prior to sitting down
to Christmas dinner? I'd like to know. I want to
form a club, or at the least, become a facebook
fan of it.)

Oh my. This is all way too complicated for the post-hectic
after-Christmas gelatinized Boxing Day noggin.
I feel as if perhaps it's my brain itself that's
been poached, pickled, set out to dry-age
for 12-21 days at a low humidity.
Call me when it's done.

This afternoon I'll start the French onion soup
process by plunging the duck remains in the soup
kettle along with onions, celery, carrots, thyme,
pepper corns and a clove or two. Later in the week
I'll put in more time at the stove, a meditation in
carmelization: hours of stirring half a dozen or more
sliced ohm-ions to their most rich and golden essence.
A glug of white wine, a little Cognac, croutes
and the best nutty Gruyere I can find:
The feast never ends.
Posted by T. at 10:16 AM