And had forgotten just how much I love this part of the world, my part of the world, going on fifteen years since I’ve been to this northwest corner of the continental United States.. Not that I’ve minded cavorting on other parts of the planet, but this is one of my holy places, and it’s almost in my back yard. Well, a ferry ride and a three-hour drive away, but still. Through Douglas fir and spruce forest-farms and mist-shrouded valleys, in the shadow of the Olympic Mountains which never came into view Sunday for all the clouds, in a temperate rain forest where annually 300 inches of rain descend from the sky.
Twenty minutes into walking on First Beach, there came into view
two seals, a sea lion, a pair of eagles and a fly-by of pelicans,
one after another and another.
And some sun, if only just barely.

The beached rippage of upended trees, the roots flounced up,
exposing a hollowed-out trunk big enough to set up camp in. 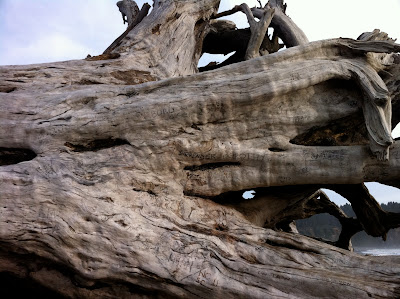 A gradation of flat stones, from palm-sized


to diminishing in size until they became sand.

Unassailable headlands.
I stood at the foot of cliffsides and ran my hands over
salty-wet moss and barnacles, leaned my shoulders
into the rock faces and then high-stepped away
from incoming waves, quickly quickly.
A roil of sea at my back.

So much the need to be here, to choose one flat black stone
and name it Absence of All Things Good.
To fling it hard and cutting into the surf.
To let it go.
To turn my back and walk away. 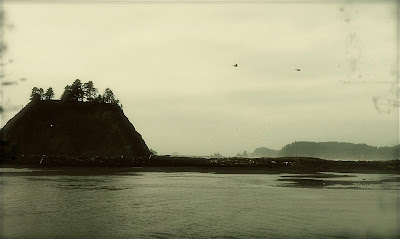 
—Rainier Maria Rilke
"Writing means revealing oneself to excess."
--Franz Kafka
"There isn't enough of anything as long as we live. But at intervals a sweetness appears and, given a chance prevails. " --Raymond Carver
"Someone I loved once gave mea box full of darkness.It took me years to understandthat this, too, was a gift. "--Mary Oliver"In the middle of the journey of our life
I found myself in a dark wood,
For I had lost the right path.
And so we came forth,
and once again beheld the stars."
--Dante Alighieri