The first inspiration of today comes from Elizabeth at a moon, worn as if it had been a shell. She's a baker extraordinaire, and when she writes about food, I always want to drop everything and head to the kitchen. Elizabeth is taking a class called Food Crafting 101 -- a kind of home-economics redux, where she'll make cheese, jam, bread, and mustard, etc.

I suggested to my son that we make our own mustard, and he said, "I've done it."

It's hard to find something he hasn't made.

Last week it was ice-cream, again, and -- the brat -- he failed to let me know that there was HOMEMADE DARK CHOCOLATE PEANUT-BUTTER CHUNK ICE CREAM in the freezer. This is grounds for expulsion, I think, but then, who else would come into my kitchen and cook up a storm of everything marvelous?!

This is my small benefit of the recession and an unemployed son. One can always find blessings, often right under one's nose (and apparently in one's freezer).

But back to the ice cream: the first spoonful, and the second, and the third, ad infinitum, was an OMG moment. An OMGOL moment. (O! My! God! [Out Loud!]) So chocolately (gawd, I sound like Keebler elf) it was almost black, with spoonfuls of chunky peanut butter. Sublime. 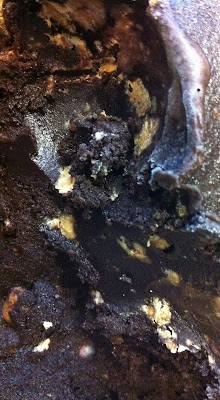 Earlier this summer, there was fresh coconut ice cream, served with sugared blackberries just moments off the stem, and then there was fresh blackberry ice cream with a color so deeply and so perfectly purple I wanted to sit down and weep. Wanted to roll in it. Wanted to wear it, which I would've done had I given in to the urge to roll.

I do believe my son has found his niche.

Anyone looking for an ice-cream maker? That is, a human one?
Posted by T. at 9:09 AM