I carried the anxiety about my son's heart in my own, tense and guarded, for more than a year until yesterday when he wrote me to say that, after tests, Everything Looked Normal. It was a year ago July when at the age of 23 he suffered a heart attack due to a side effect of a prescription medication. P. and I were here -- in Ireland, on Achill Island -- when the call came from my other son. I spent most of the next few days on the phone, to him, to his brother, to my sisters, to various docs and nurses. It was not a serious heart attack, as those things go, but the fact of his young age and my distance -- 6000 miles -- made me frantic. And he insisted I not come home. Insisted, like he's never insisted before. My brother-in-law reinforced his request, and I felt obligated to respect it, but few things have been more difficult. We stayed the remaining five weeks, in daily communication with skype chats.

And I truly was not aware of how closely I held those remnants of anxiety until yesterday's news, when I literally felt an untightening in my own heart, an unknotting of my tongue. It was an extraordinary moment of awareness.

We'd planned the drive to Achill prior to the good news, but our pilgrimage to one of my favorite places couldn't have been more timely, despite the rain, which intensified as the afternoon light lingered into evening.

Upon recommendation from the barmaid at Minaun View (pub), we took a turnoff to the end of the road below the headlands and cliffs of Minaun Heights -- 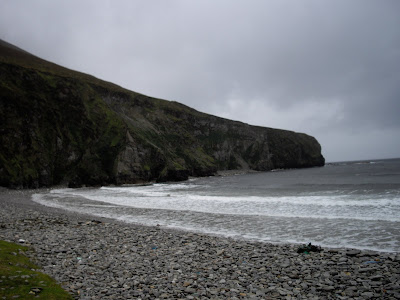 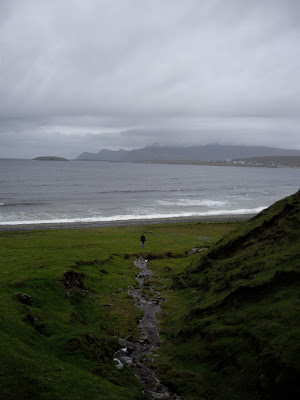 We discovered St. Finians holy well partway up a steep sheep-path, beside a spectacular waterfall. The ovine creatures perched above us on edges and outcroppings, unconcerned by precipices: 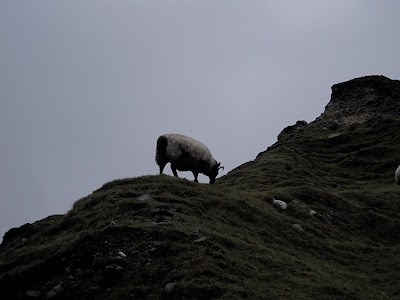 -- while I clung to the scrubby hillside, my sandaled feet slippery and soaked, attempting to balance (it was very windy), avoid the numerous dung piles, and take photos. (The sacrifices I make for my faithful readers!) I neglected to dip my pagan fingers in St. Finian's waters, feeling adequately blessed already, and anyway, it wasn't worth losing my footing, and I didn't fancy an afternoon careen down the slope to the rocky road below. 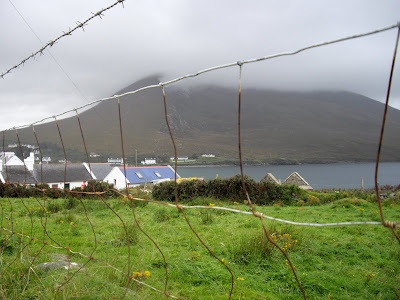 And on the remote edge of the continent, in an Irish hamlet without a pub (didn't know this was possible), as we wound between houses situated nearly on the road itself, I saw the usual sign -- "Photographs, Prints, Gallery" -- and expected the usual disappointment, the usual poorly rendered oil paintings, the cliche ocean-beach photos, etc. 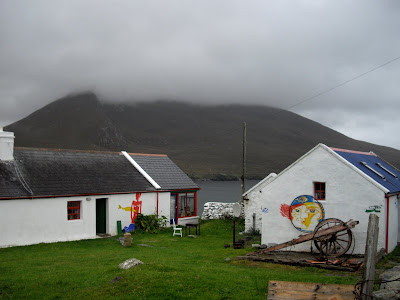 But when we stepped into the tiny gallery, we found ourselves in our own version of heaven: Franticham. (Actually not pronounced "franti-cham" as I first thought, but "frantic-ham".) 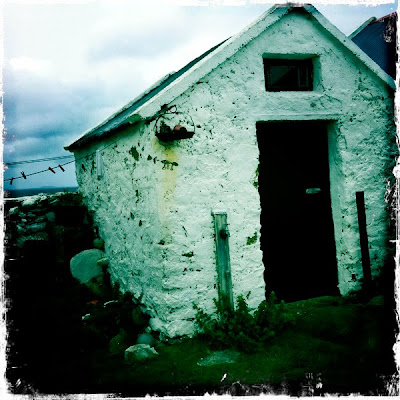 right there in cliffside Dugort, overhanging the North Atlantic: 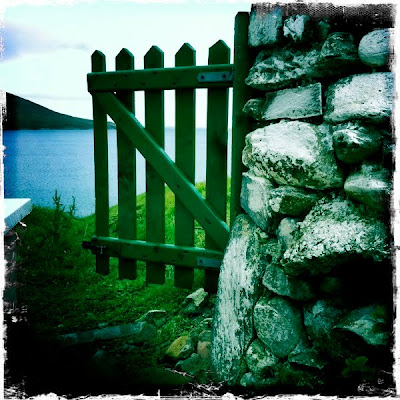 I felt as if I had wandered into a dreamscape wonderland, had at last discovered water after wandering, parched, for centuries. Here were hand-tied books, hand-bound books, books with odd catalogs of items, poetry, prints, postcards, all with a high level of artistic integrity, begging to be taken home by, well, me. And Paul.

We fell in love with this: Franticham's Fishbox. Twenty-six prints by twenty-six artists, signed and numbered. In an actual fish-n-chip box from a restaurant in Westport. With actual fish (dried and encased behind a tiny plastic window). Guess what we came home with? Twenty-six fish. In a box.

I wanted to stay and have Frank Van Maele teach me everything he knows about print-making and the art of book-making. (He doesn't give classes.) I wanted to stay until I'd perused every last piece of paper in the cottage. He does what I've dreamed of doing for many years, and seems to make a living doing it.

Ironic, though, that in this era of diminishing print-on-paper, we would happen upon this mecca of art/paper/print, not on the map, not in the guidebooks (Frank eschews inclusion in any), with only a small sign hand-painted on the side of the house. And to think of the many times we've driven to Achill Island, and never bothered the mile-or-so detour to Dugort!

This, of course, further reinforces my argument that as the written word enters the digital age, the paper books and presses that manage to persist will be those that exhibit a high degree of artistic integrity: letterpress-printed text, lino/wood-cut/silk-screen-printed art, one-offs, signed-and-numbered editions. What could possibly be a death knell for many books as we know them could quite possibly become a boon to books as I would prefer to know them. No more boxes of unsold poetry books piling up in the basement! No more shelf after shelf of mass-market paperbacks in bookstores! No more deforestation caused by crap books! (Okay, a bit of an elitist rant here but I! Don't! Care!)

We returned to the house well after dark, in mighty wind, stinging rain, with an invasive damp in every thread of clothing, but over all was the sense of having spent a day blessed by the universe.