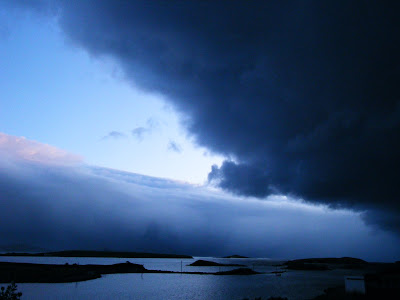 Well, the clouds, at least. Although a terrific storm
pummeled us last night, the storm that is My Life
has eased a bit.

We drove to Galway yesterday in merciless rain
and traipsed up and down High Street, into shops
(the usual shamrocked-tchotchkes) for a respite
from the continual waterfall. Too bad, because none
of the buskers were out, which the kids would've
enjoyed. And it was chilly. Alas.

Our guests depart early tomorrow, but I wish
they would stay the summer. The next group
rolls in Friday mid-day, and the craic resumes.

Daily phone calls to Seattle. Hoping I've made
the right decision to stay-on here. But the Shannon
airport is only a few hours away, and there's always
a flight heading west, if the need arises.
And it likely that the myocardial infarction
was the result of a rare side effect of a new medication
R. was taking. And although it's horrifying to have to
consider that this is the case, on the other hand
it's comforting to consider that an irregularity in his
own physiology was probably not the underlying cause.
He's come through all the tests and bloodwork
with flying colors. Now it's a matter of wrapping
one's mind around the notion of a heart attack
at 23. It's a notion fraught with doom and outright shock.
When we can process this, and when R. eases back
into a regular routine, then perhaps the 3am revving
train-engines of anxiety will fade to silence.
In the meantime, it's Better Living Through Chemistry.
Posted by T. at 2:49 PM