My first Irish publication!
Last week I sent a new poem to The Mayo News,
and it appeared in this week's edition.
It can only be viewed online in their digital edition,
which is a pay-per-view operation. So instead,
I've photographed the page of the newpaper: 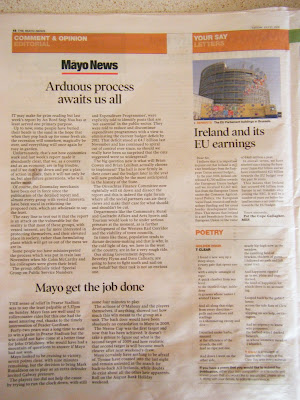 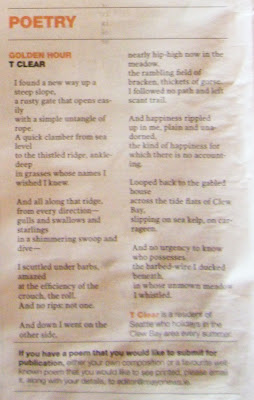 Unfortunately, because of the layout,
the linebreaks were slaughtered.
Here is the correct version:

I found a new way up a steep slope,
a rusty gate that opens easily
with a simple untangle of rope.
A quick clamber from sea level
to the thistled ridge, ankle-deep
in grasses whose names I wished I knew.

And all along that ridge, from every direction—
gulls and swallows and starlings
in a shimmering swoop & dive—

I scuttled under barbs, amazed
at the efficiency of the crouch, the roll.
And no rips: not one.

And down I went on the other side,
nearly hip-high now in the meadow,
the rambling field of bracken, thickets of gorse.
I followed no path and left scant trail.

And happiness rippled up in me, plain and unadorned,
the kind of happiness for which there is no accounting.

Looped back to the gabled house
across the tide flats of Clew Bay,
slipping on sea kelp, on carrageen.

And no urgency to know who possesses
the barbed-wire I ducked beneath,
in whose unmown meadow I whistled.