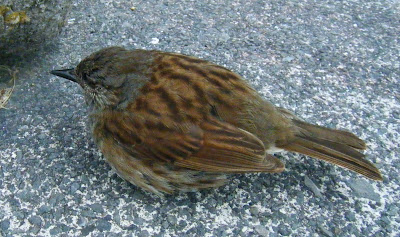 A young female sparrow crashed into a window
this morning, leaving a considerable glob of feathers
stuck to the glass. It tried to stand, and toppled.
I picked it up, and cradled it for nearly an hour,
as its breathing went from frightened and labored
to slow and shallow, eyes closed, one foot and one wing
seemingly hurt. Such intricate, tiny feathers!
Around me, on the porch, a host of bees and flies,
all about their work. Two male goldfinches sparred
for the attentions of a female. Horses across the cove
grazed and whinnied. Barely a breeze.
I was thinking about those strawberries
purchased yesterday, small Irish berries:
breakfast. And coffee. And oats.
But it all kept.

I kept waiting for my sparrow to suffer
her last breath. Just last week I buried
a cat who, in her prime, would've made a quick gulp
of this feathered handful. Who am I to be troubled
by this small death: chicken soup in the fridge?

And then her eyes slowly opened, and she righted
herself, and after a few minutes, fluttered off
to the gorse. I went in to my berries and grain.
Posted by T. at 8:23 AM